Apparently it is incorrect to call a Welsh rabbit a rarebit, it is a “false etymological refinement”. There are, in fact, three types of rabbit: Welsh, English and Scottish. The Welsh is the classic, but I can’t find anywhere that states it was the original rabbit, though people assume it is. I suppose it’s one of those dishes that have just been around for a long, long time. Also I have no idea why they are called rabbits, but there are theories abound. One is that the Welsh peasants of yore were not allowed to eat rabbits caught in hunts by the nobles, so they substituted it for cheese (which has, of course, always been a popular staple in Wales). That’ll do me.

These days we are used to a very thick cheese topping piled on our toast for Welsh rabbit, but traditionally it was meant to be quite liquid so it soaked into the toast whilst it grilled.

For 2 slices of toast

Toast two thick slices of toast. Meanwhile gently melt 4 ounces of good grated Cheddar (or Lancashire or Double Gloucester) with 3 tablespoons of ale (or milk). Stir until the mixture becomes a thick, liquid cream. Add an ounce of butter to the melted cheese, alongside some salt and pepper and some mustard. Taste and add more seasoning or mustard if you like. Place the toast in a heat-proof dish and pour the cheese mixture over it. Place under a very hot grill until the cheese toasts nicely and develops brown spots. 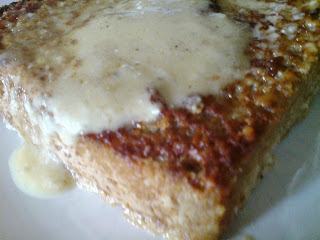 #155 Welsh Rabbit – 6.5/10. It may not look as nice as a more modern Welsh rarebit, but how could toasted cheese and mustard possible taste bad? It was quite unusual having the runny cheese soaked up into the bread, so although it was delicious, I think I prefer the cheese to be stacked on top, with an egg yolk include plus a bit of Worcester sauce. That said, I did hit the spot! I think I could eat some form of cheese on toast every day if I let myself.
Posted by Neil Buttery at 12:11 PM