I bought a nice new pie dish last week, so I thought I’d Christen it with a nice big pie for Sunday dinner. I decided upon this Cheshire Pork and Apple Pie because it needed to be pretty quick to do (no cooking of the filling beforehand) as I had to be in the lab in the morning. Plus there was a load of Cox’s Pippins in Unicorn in Chorlton – apparently the last of the stored apples from the previous autumn.

This is a very traditional pie – essentially meat stewed in liquid (in this case cider) under a pastry crust, and comes from Hannah Glasse. It is a little odd in that it has a double crust; I’d have no problems with it if it was cooked in a thick sauce. Surely the pastry lining the pie dish will just turn into a soggy mess? To pre-empt this, I used a previous trick of The Grigson – to place a baking sheet in the oven as it heats, so that when the dish is placed on it, the underside quickly cooks.

First of all make some shortcrust pastry using 10 ounces of plain flour and use two-thirds of it to line a 2 ½ pint capacity pie dish.

To make the filling you need to prepare your pork – you need 2 pounds of boned pork loin. Cut off the rind and trim away the fat with a sharp knife, then slice the loin and chop into chunks. Next peel, core and slice around 12 ounces of Cox’s orange pippins. Then mix 8 ounces of chopped onion together with 4 chopped rashers of cured, unsmoked bacon. Now layer the ingredients in the pie dish: half of the pork, then half of the apples, scatter them with some brown sugar and then sprinkle over half of the onion-bacon mixture. Season each layer with salt and pepper plus some grated nutmeg. Repeat with the remainder in the same fashion. Dot the top with around 2 ounces of butter and then pour on ¼ pint of dry cider. Cover with the remaining pastry sealing and glazing it with beaten egg. Make some fancy pastry decorations if you fancy. Bake for 20 minutes at 220°C, and then turn the oven down to 160°C for a further 45 minutes. Jane doesn’t indicate what to serve with it, but I went with mustard mash and some asparagus. 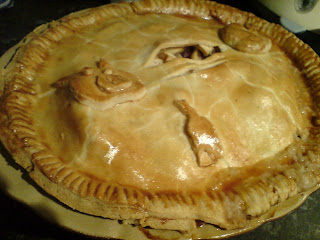 Check out the arts & crafts spectacular atop the pie! 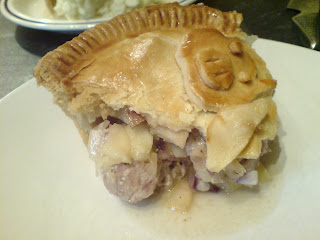 #156 Cheshire Pork and Apple Pie – after much deliberation on this one, I give it 5/10. I think it was pretty average – I wasn’t sure about the amount of liquid in the pie, which after my efforts to prevent it, still made the pastry soggy. I think, it could be easily improved, however by making a roux with the butter and some extra flour and using the cider to make a sauce. I think it would have made this okay effort into a very hearty one that would stick to your ribs, as we say in Yorkshire!

Never tried this recipe before, sounds really delicious though. Thanks for sharing.