Every Wednesday at work, one of us tries to make a cake and bring it in so we can all get together for a chat; something we rarely get to do. We have been a bit slack as a department recently, so I thought I’d make one. This seemed perfect, I had all the ingredients in, it seemed a little unusual, but basically a normal cake mixture, so great stuff… I expected this cake to be a real hidden gem – Jane Grigson write quite a lengthy entry on this cake and she says that she was easily converted from the ‘traditional’ flour-based cake.

Here’s how to make a rice cake:

Cream 4 ounces of butter with 8 ounces of caster sugar and beat in three eggs one at a time. Stir in 8 ounces of rice flour and the grated zest of a lemon. Pour the mixture into a greased and floured 7 inch cake tin and bake at 180⁰C for anywhere between 50 minutes and an hour and a half. Jane doesn’t say to fill it with anything, so I used raspberry jam and Butter Cream I. 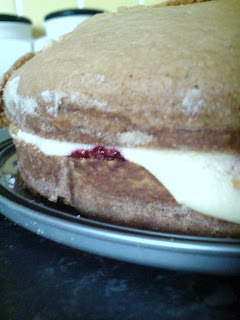 The world's most boring cake:

you saw it here first!

#160 Rice Cake – 2/10. Totally crap! It was so bad I didn’t even bother taking it into work. The cake was so hard and dry, there was no spongy texture as there was no raising agent or gluten there. Also, because of the lack of gluten, the grains of flour remained granular. Bad, bad, bad! Its only saving grace was the jam and butter cream, and I did the butter cream wrong!!

I've made this cake a number of times and it always turns out well - and has received very favourable comments when I have taken it into work. Also, it's a good (easy!) cake for for friends and family who are gluten intolerant. I never fill it with anything - I just make sure there's plenty of lemon zest in there.

I'm much better at baking since that post was written, perhaps I should revisit this one?