This recipe contains absolutely no seasonal produce whatsoever. I’m not even sure it has any nutritional value either. This bizarre pudding was greatly loved in the Grigson household, particularly at birthdays and it seems to be some odd post-war version of a tiramisu: fresh coffee replaced by instant (fine by me), cream and cream cheese replaced by butter, sugar and ground almonds, and coffee liqueur replaced with sherry. It harks back, I think, to World War II where ‘mock’ foods were commonly made, e.g. mock cream, mock apricot tart, mock mayonnaise. They usually involved whipped margarine or lard. I know the apricot tart used carrots as its substitute.

Jane Grigson also mentions how good the French are (were?) at coming up with new and exciting puddings using boudoir biscuits. However, this one’s not French, it’s English, and was originally published in the Daily Telegraph. Alarm bells should have started ringing at that point…

Begin by creaming together 4 ounces of lightly salted butter with 4 ounces of vanilla sugar, once fluffy, beat in a large egg yolk. Next, measure out ¼ pint of milk and 4 ounces of ground almonds. Incorporate these into the creamed butter and sugar by adding alternately, a little at a time. Now slake a generous teaspoon of instant coffee in 2 teaspoons of boiling water and mix that in. Give it a taste – add more coffee if you like.

Now pour another ¼ pint of milk into a bowl along with a glass of dry sherry. Dip boudoir biscuits in the milk, but don’t let them soak, and arrange them in the bottom of a shallow oblong or oval dish. Now spread a quarter of the almond mixture over those. Repeat so that you have a total of 4 biscuit layers and 4 creamy layers. Make sure that you put cream over the sides so that all biscuits are covered. Cover with toasted slivered almonds and glace fruits if you like. 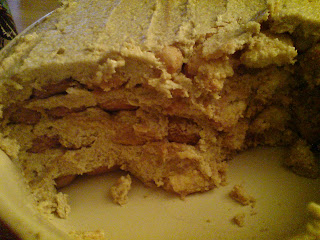 It's hard to believe, but this tasted worse than it looked

#153 Mocha Cake – 2/10. Not precisely inedible, but just so unbelievably sweet and sickly. I have no idea why the Grigson clan like this pudding so much. There amount of sugar put my teeth on edge, and I may have woken up the next morning diabetic. The pudding was left out for a few days and was still okay to eat (it was slightly better in fact as the biscuits had gone soggier), no fly or microbe seemed to have touched it. I think that it may remain perfectly preserved for ever more due to its humongous sugar content.