No I’d never heard of one either. A junket is made by mixing milk with rennet and letting it curdle, adding whatever flavour you wish. Essentially, it is Little Miss Muffet’s curds and whey. These sorts of puddings were very popular – and still are in France. The English version being different in that the curds and whey aren’t separated, whereas other nations usually do. This is a very old recipe going way back – the earliest Griggers found was in a book from 1653. In fact the term ‘junket’ comes from the Norman French, jonquet, which was a basket made from rushes (jonques) to drain cheeses, says Jane. The junket has fallen out of favour, but is hanging on as a speciality of Devonshire, south-west England. The trickiest bit of the recipe, is finding somewhere that sells rennet – if there’s any Mancunians reading this, I got mine from Barbakan in Chorlton.

FYI: Rennet is an enzyme that used to be extracted from the stomachs of calves to curdle milk. Although still used, most manufacturers used vegetarian rennet to make their cheeses etc. I think the veggie-friendly rennet is produced using bacteria with the rennet gene inserted.

Warm a pint of Channel Island milk slowly until it reaches 37°C. If you can’t get Channel Island milk, use whole milk – do not be tempted to use skimmed or semi-skimmed, it will not work. Whilst it’s warming, mix a dessert spoon of sugar with 2 tablespoons of brandy in the serving dish that you want to set your junket. When at temperature, pour the milk into the dish and carefully stir in a dessertspoon of rennet (follow the instructions on the bottle in case this is different). Now leave the milk to set at room temperature. I went back and checked it after an hour and it was done – it had essentially become fromage fraise. Now slacken off ¼ pint of clotted cream with a little double cream and pour or spread it over the junket, being careful not to let it split. Lastly sprinkle some nutmeg or cinnamon over the top and you are done. 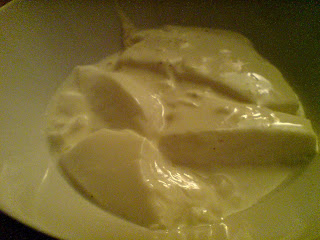 #131 Devonshire Junket – 5/10. This was ok, but sugar and cream always tastes good. I think the brandy should be replaced with some stewed fruit or vanilla extract, because I loved the texture of it. I think with a little playing around, the junket could have a come-back. I am dreaming up variants as I type…
Posted by Neil Buttery at 5:41 PM

I squeezed some orange juice over what was left it over with a bit more sugar and tranfored it into a taste sensation!

4/10 plain. 6/10 with the fruit added. Pretty bland on it's own but pop in some fruit and off you go for a tasty quick treat. Was a bit like baby food, cute and easy.

Yeah, bland and a bit non-descript really. Inoffensive, but not something I rush to have again. Didn't try it tarted up with flavour, so maybe I missed a treat there. 3/10.
Charlotte

My Parents are from dvon & this we had regulary in the summer. No brandy and served met stewed rhubard.. heaven..

Sounds great! I never thought of having it with rhubarb...I can see that working really well