One of the least-explored chapters in English Food is the Fish chapter. The main reason for this is that I have the least experience of the foods therein. Being English (I won’t say British as Wales, N. Ireland and Scotland may be different) means, generally, the only fish you get to eat is white fish – cod and haddock. Though I love the fish I’ve tried, one thing we have never eaten as a family growing up in Yorkshire is shellfish. The only exception is prawns because my Mum likes them. Because I’ve never really tried the bivalves – cockles etc., I find them tricky to get my head around them – they look like something from a biological specimen jar and do not resemble anything else that might turn up on the dinner table. I felt an inauguration coming on, and “why not” I thought, start at the top, with the king – oysters.

I popped on down to the Arndale Market in Manchester, got some rock oysters for 70p each and an oyster knife for a fiver from the cooks stall. Hopefully I’ll get to use it more than once…

I thought I’d better not go straight in at the deep end with a raw squirming oyster, but instead get there by degrees. First step – oyster cooked and smothered in some kind of sauce with lots of other flavours. Second step – oyster cooked but by itself. Final step – raw oyster. Griggers was there to help, natch, with this recipe straight out of the 1970s:

This recipe is per person, so multiply up depending on how many you’re cooking for:

Begin by heating your oven to 220°C whilst waiting for it to heat up, open 4 oysters with an oyster knife. This can be tricky if using large rock oysters with big gnarly shells, but with a bit of patience it’s quite easy to get the knack for opening them. Give them a rinse and a scrub under the cold tap first and make sure you hold the flat side of the oyster uppermost and with your grasping hand wrapped in a tea towel. Use the knife to prize the hinged back part of the oyster open. Do this over a bowl so you can keep any liquor that escapes – very important for later. I found that placing a sieve lined with some kitchen paper filtered away any sand or cracked bits of shell.

Now hollow out 2 bread rolls by first slicing the top off and then scooping out the centre, making sure you don’t make any holes in the side. Brush the lid and roll inside and out with melted butter – about ½ an ounce – and bake for 10 minutes until crisp and golden.

Meanwhile, melt another ½ ounce of butter in a pan and cook the oysters for around a minute and a half until they are opaque and firm. Remove them and cut them up into two or three pieces. Pour the oyster liquor into the pan along with 2 tablespoons each of double and soured cream, and season with salt, pepper and 3 or 4 drops of Tabasco sauce. Reduce it down to a thick sauce, stirring all the time, and warm the oysters through in the sauce. Check for seasoning. Lastly, divide the mixture between the hollowed bread rolls and serve immediately. 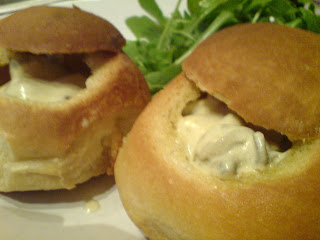 #132 Oyster Loaves – 7.5/10. I really enjoyed this. I’ve heard people say that oysters taste of ‘the sea’, or ‘ozone’ or iodine’; I’ve never been sure what they meant by that, but now I do! The oysters were sweet, rich and very soft and the piquant, yet creamy sauce really worked well. The idea of putting them in a hollowed bread roll might seem a bit naff now, but you could serve on a circle of bread fried gently in butter to make look more with the times. One would make a really good first course. I am very impressed with my first oyster adventure and would definitely encourage anyone who is squeamish about them to give this recipe a try – it simple and not expensive.

FYI: In days of yore, oysters were considered food for the poor and were largely ignored by the posh. They were used as a substitute for mushrooms (hence steak, kidney and oyster pie) in many dishes as they were very rare due to the fact no-one had worked out how to cultivate them. It wasn't until they became scarce due to loss of habitat and pollution that they were thought to be a delicacy.
Posted by Neil Buttery at 3:14 PM

Raw. Its the only way. Cooked they taste rank. Raw man. Waaay better. And they don't squirm a bit.

Maybe I should just skip to the end then and have one au naturelle!

Or just have an oyster instead!

Prior to this I'd only had oysters raw (v. good) and hadn't really comtemplated them as something you cook, but this dish was great. The filling was really tasty - creamy, salty and tangy - and naff or not I liked the hollowed out loaves, but maybe that says more about me than it does the recipe, who knows? 8.5/10.
Charlotte