#134 Mushrooms, or the Pearls of the Field

The male cook/chef that seems to appear often in English Food is one Alexis Soyer – he wrote a book called Shilling Cookery for the People in 1854. I’ve done one of his recipes before (reproduced in English Food) using oranges. This one is a method of doing good service to a large field mushroom, should you find one, as I did in Asda the other day. I thought I’d quote what he says about this dish straight from English Food as the language is brilliant, though the people for whom he was writing probably thought he was a right old ponce:

“Being in Devonshire, at the end of September and walking across the fields before breakfast to a small farmhouse, I found three very fine mushrooms, which I thought would be a treat, but on arriving at the house I found it had no oven, a bad gridiron and a smoky coal fire. Necessity, they say, is the mother of Invention, I immediately applied to our grand and universal mamma, how should I dress my precious mushrooms, when a gentle whisper came to my ear…”

This is what he did:
Place the mushroom on a round, or rounds of toast, depending on size, that have been spread with clotted cream (I had some left from the junket I made the other day). Have the mushroom stalk side up and spread that with more cream. Season well and place in inverted Pyrex dish over it and bake in a hot oven (200°C) for 30 minutes. He used a glass tumbler – to prevent the smoke spoiling the flavour of his precious mushrooms. It’s a good method, as it does keep all the mushroom juices in. 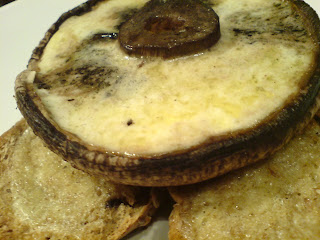 He goes on to say:
“The sight when the glass is removed, is most inviting, its whiteness rivals the everlasting snows of Mont Blanc, and the taste is worthy of Lucullus. Vitellius would never have dined without it; Apicius would never have gone to Greece to seek for crawfish; and had he only half the fortune left when he committed suicide, he would have preferred to have left proud Rome and retire to some villa or cottage to enjoy such an enticing dish."

#134 Mushrooms, or the Pearl of the Fields – 8/10. I have to say, although he talks a load of nonsense, he knows how a treat a mushroom fairly. This simple supper dish is maybe the best way to show off the earthy flavour of those large meaty, juicy field/Portabello mushrooms. The clotted cream soaked into the crispy bread and also formed a rich sauce in the cap. Brilliant.
Posted by Neil Buttery at 11:49 AM