Thus far I have enjoyed making the preserves in English Food and was very much in the mood to make a new one – the Banana Chutney was selected as I had all the ingredients other than the masses of bananas in already, plus it seemed like a no-brainer; no faffing about with pectin and sugar thermometers here! 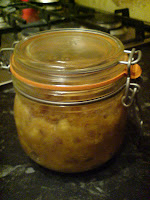 Begin by slicing up 12 bananas and simmering them in ½ a pint of cider (or white wine) vinegar until the bananas are cooked and mushy. Stir in 8 ounces of sugar and allow to cool. Next stir in 2 medium onions that have been finely sliced, 4 ounces of finely chopped sultanas, an ounce of curry powder (whatever strength you like), ½ teaspoon of cinnamon, a pinch of Cayenne pepper, and salt – and salt well; chutneys should be salty, add up to 3 teaspoons. Cover the bowl or pan with Clingfilm and allow to stand for 12 hours. Taste and check for seasoning again before potting in sterilised jars and store somewhere cool.

#127 Banana Chutney – 5.5/10. Nice and sweet; Griggers says to serve with ham, salt pork and chicken, but I had it in a cheese sandwich and it was very nice, though it was quite dry – I prefer chutneys to have a bit of sauce to them. If I were to make itagain, I would add more vinegar and sugar and would also cook the curry powder out too in a little oil before adding the bananas and vinegar at the start (but what do I know).
Posted by Neil Buttery at 5:17 PM

Hi, I tried this recipe the other day too - just had some for lunch - and didn't find it dry at all, and would have given it more like 8/10. Maybe there's a lot of scope for difference depending on how it goes? Thrilled to have found your blog and look forward to looking through it for inspiration.

Hi Andrew. Thanks for posting a comment and even bigger thanks for trying a recipe. I haven't visited the chutney and preserves section of the book for a while, you might have inspired me to have a crack at one soon....

I was a bit surprised to find this recipe when I clicked on curry on the side bar.