For dessert, Charmolian requested Whim-Wham. Not a proper dessert, but more a “tasty mouthful”. Here at Grigson Towers, we’re all about tasty mouthfuls. Plus it was an Eighteenth Century recipe so it fitted the bill. The other good thing about this dessert is that it can be knocked up in minutes… “Whim-Wham means something trifling, i.e. a trifle”. She goes on to say that it is also “delicious and not too heavy”. All boxes ticked there then.

For each person:
Start off by breaking a sponge finger into four pieces and laying it in the bottom of a small ramekin or cup. Next pour over a tablespoon of sherry or Muscatel dessert wine - I (or, rather, Charmolian) used sherry. On top of this dollop on 2 tablespoons of whipped cream. To decorate, add half a teaspoon of chopped roasted hazelnuts and something sweet – Griggers says some leaves cut from angelica or cumin comfits, but not – heaven forbid – glace cherries as they would be “out of style” (this is one of the few times that the book shows its age). The most difficult part of the whole meal was getting hold of angelica – I eventually got some in Tesco, if anybody is wondering. I have no idea what cumin comfits are, but they sound delicious – I may try and locate some… 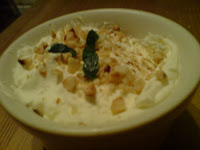 FYI: Angelica has been cultivated since the Tenth Century as food and for its medicinal properties – it has antibacterial, antifungal and antiviral properties. It has been noted also for its wonderful taste and aroma – compared to musk and juniper. I found that it was completely tasteless in its candied form. Hey-ho.

FYI2: It is called angelica because the Archangel Gabriel supposedly informed us of its uses. That was nice of him, wasn’t it?

#125 Whim-Wham – 3/10. Ms Grigson should be done for false advertising here – the phrases “tasty mouthful” and “not too heavy” are very much – in my opinion – fibs. They were so rich, alcoholic and massive. By the time dessert was brought out I was a little tipsy and for somehow manage to not only polish off mine, but also someone else’s. The next day, when I thought of them, I puked. Next time (as if there will be one), I’ll used Muscatel wine. Bleurgh…
Posted by Neil Buttery at 12:10 PM

1/10. Bleurgh indeed. ugh, these little horrors were so heavy on the sherry and the cream i only managed half of this 'tasty mouthful'. After a rich main course and plenty of wine consumed this was just too much for me, i think i may have winced when i took my first mouthful.

I still feel queasy thinking about them. Heave!

there's a series of recipes for comfits, including almond,and caraway seed, in Good Things in England by Florence White. all i have to say is there must be an easier way.

i've been a googling, and multicolored sugar coated fennel seeds are reasonably available at indian groceries. they sound good, actually.

Oh yes - I've had them before and they are nice. Are they the same as cumin comfits though?

Chhers for finding that book though purejuice - i'll check that one out...

I really liked this pud. Granted, it was booze-tastic and uber creamy, but the flavour combo reminded me of a dessert my Mum used to make when I was wee, which was ostensibly the same. From memory it was chocolate chip cookies doused in sherry and stuck together with whipped up cream to form a log and then covered in more of the same and finally decorated with walnuts and crumbled Cadbury's Flake. So there was a bit more biscuit going on in my Mum's recipe than the Whim Wham, but you'll appreciate the overall outcome being pretty similar. Frankly, biscuit, sherry and cream; what's not to like? I think I pretty much hoovered up any that were left going begging and suffered no ill effects, clearly I'm made of sterner stuff than the rest of you! Although, it would seem that I've been practising with sherry from a young age - thanks Mum. 8/10
Charlotte

I'll have to step up the gears then Char - and do the full trifle! Bleurgh

I personally would not have this after a rich main course but something a lot lighter. It is all about balance.