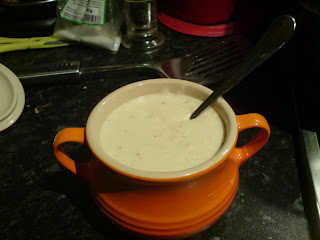 Ahhh! The bread sauce. A total necessity to go with roast pheasant (or with any roast game or poultry). You don’t get much a more English accompaniment to a roast dinner than this – though not many seem to have tried it, put off by the soggy bread aspect. Don’t you be put off, reader; the bread completely disintegrates to make a nice smooth sauce. Plus, the sauce is prevented from being at all gluey by the addition of butter or cream (or a mixture of the two). If you’ve never made it, have a go – it’s very easy and can be made ahead of time as long as you cover it in cling film to prevent a skin forming and you reheat it in a bowl over a pan of simmering water.

FYI: This is a very old recipe, bread sauces go back to Medieval times though stock was used as a base more often than milk. Thick sauces were required then because trenchers (plates made of dried bread) would have gone soggy otherwise. Sauces thickened with flour or eggs would not work for that as they would either glue or custard respectively!

Begin by putting ¾ of a pint of whole or Jersey milk into a basin along with a small onion that has been halved and studded with 3 or 4 cloves. Place the basin over simmering water and keep the milk just below boiling point for as long as possible so that it can be infused with the flavours. Whilst that is going on use a food processor to make 4 ounces of white breadcrumbs. Take out the onion and cloves and whisk in the breadcrumbs until it is thick. The suace will thicken up after a few minutes, but if it’s a bit on the thin side make some more breadcrumbs and whisks them in. Season the sauce with mace or nutmeg (or both), salt, white pepper and a pinch of Cayenne pepper. Lastly, enrich the sauce with 1 ½ ounces of butter or 2 tablespoons of cream (or a bit of both). Pour into a ‘sauce tureen’ and add an extra sprinkle of Cayenne, says Griggers.

#123 Bread Sauce – 9/10. I loved this; creamy, rich, but not sickly at all. I’ve made it before, but this definitely the best recipe for it so far. The old fashioned spices really made it work for me.
Posted by Neil Buttery at 3:45 PM

8/10. a very good bread sauce, the spices warming it through and the jersey milk adding to the rich lovely flavour. very nice.

7/10
very nice, never had before, will defohave again though, went well with the gravy as well!!
Agree about the spices very nice!
paddy