The eagle-eyed among you will realise that I haven’t done Baked Almond Pudding I. It was a toss-up between the two. Almond puddings are not something I think of as English and yet there are two in here. This is one custardy in consistency and other is cakey. We were in a custard mood.

What is good about the recipe is that I get to use a new ingredient – bitter almond extract. Not something you can get hold of that easily, and I got mine from an internet site, though cake decorating shops will sell it too, I expect. This pudding is very easy to make, simply a case of mixing some ingredients in a bowl:

Mix together 4 ounces of melted butter, 4 ounces of ground almonds, a few drops of bitter almond essence, 4 large eggs, the zest and juice of half a lemon, a glass of sweet sherry, 4 ounces of sugar and a pint of single cream. Pour the whole thing into an ovenproof dish – the shape doesn’t matter, but you need to make sure the mixture is around 1 ½ inches in depth. Bake at 190⁰C for around 45 minutes so that the centre is still wobbly. 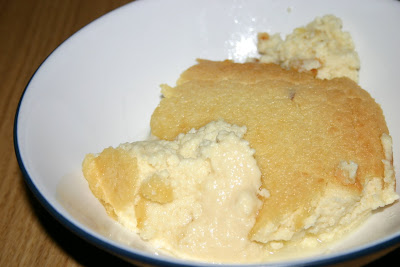 #236 Baked Almond Pudding II. “A marvellous pudding” says the Grigson, and I very much agree. It was very light in flavour and texture bearing in mind the rich ingredients. The almond essence gave it a lovely aromatic hit. It was really good cold the next day – the slightly crumbly texture of the almonds made it very similar to the filling in a Yorkshire curd tart (one of my own personal favourite desserts, though I’ve not done the recipe from the book yet). Yep, marvellous, 8.5/10.
Posted by Neil Buttery at 3:15 PM

catching up, this looks and smells -- yes, i have smell-o-vision here -- lush!

It was a good one - the perfect combination of custard and stodge!