Ah, the pickled egg, one of England’s most traditional and bizarre delicacies; and they are certainly not to everyone’s tastes. Usually to be found in the fish and chip shop or the pub, they are strange creatures; like little biological specimens bobbing about in their brown malt vinegar jars. I reckon that people automatically expect to dislike them, and they probably would do; however, this recipe in English Food seems very good. The main reason why a pub pickled egg is snubbed that they are pickled in pure malt vinegar which makes them far too harsh. This recipe uses white wine vinegar and quail’s eggs over hen’s eggs, which means they are tiny and bite-sized rather than a great big chore. You can use hen’s eggs for this recipe though as the spiced vinegar seems so much more subtle and sweet. In fact if you ever do get a load of hen’s eggs, this would be a good way to store them. They take two weeks to pickle, so I don’t actually know what they taste like yet; we shall have to wait and see (see here how they were). 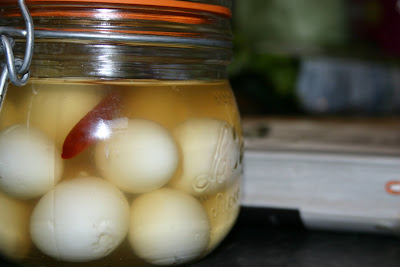 First of all, you need to make your pickling vinegar and the amount you required will depend upon the number of eggs you want to pickle. I had dozen quail’s eggs and so only needed half a pint to fill one large jar. I’ll give you the amounts for two pints of pickling vinegar as provide by Griggers herself, you can alter amount as required. Pour two pints of white wine vinegar into a pan along with half an ounce each of fresh peeled ginger, mustard seeds and white peppercorns plus three small dried chillies. Bring to the boil and simmer for five minutes. Strain the vinegar and allow to cool. Meanwhile, place the eggs in another pan and cover with cold water. Bring to a boil and allow to simmer for two minutes for quail’s eggs and ten minutes for hen’s eggs. You would do well to time the simmering, you don’t want to guess the times and have over-cooked black-ringed yolks. Let the eggs cool also. Shell the eggs and arrange them tightly in a sterilised jar – if hen’s eggs arrange them upright; if quail’s don’t bother as they are far too fiddly. Pour over the spiced vinegar, tuck in the dried chillies and seal tightly. Make sure you use non-metal lids as the metal will be corroded by the acidic vinegar. Leave for two weeks before using in salads or as an hors d’oeuvre, says the Grigson. I might use them as an excuse to have fish and chips.
Posted by Neil Buttery at 11:57 AM