Gingerbread is of course, not bread but a biscuit. According to Griggers, the biscuity gingerbread that we know and love, and (I assume we use for gingerbread men) is in fact Grasmere gingerbread, and although you can buy it and make it, the original recipe is a secret. Apparently, it is still sold in Grasmere from the local church (William Wordsworth is buried in its grounds). There’s another Grasmere Gingerbread recipe in English Food as well as a Medieval Gingerbread – gingerbread has a long and chequered past, but I’ll save that story for that entry.

One weird thing though – there’s no other gingerbread-type things in the book; where the heck is the Yorkshire Parkin? I shall add it to ever-increasing list of glaring omissions from the book.

Melt 5 ounces of slightly salted butter over a low heat and allow it to go tepid. Meanwhile mix 8 ounces of plain flour (or fine oatmeal, or half-and-half) with 4 ounces of pale soft brown sugar, a teaspoon of ground ginger (though I misread and added three, it was fine and suggest adding three instead of one) and a quarter teaspoon of baking powder, then add the butter and mix well. Press the mix down well with your hands in a baking tray that has been lined with baking paper and bake at 180°C for 30 minutes. Remove from the oven and cut into oblongs, but allow to cool in the tin. 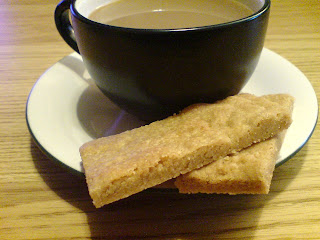 #174 Grasmere Gingerbread I. I’ve not done many of the biscuit recipes from the book, as I don’t really get that excited about them, but these were delicious and very easy to make. I’ll never do cartwheels, however, so I’ll give them a stoic 7.5/10.
Posted by Neil Buttery at 4:33 PM