English salad sauce was used as a cheaper alternative to mayonnaise and other similar posh or tricky to make dressings. Nothing to be ashamed about, says Jane, and it comes from Eliza Acton – a cook that pops up again and again in English food, so I assumed it would be some kind of delicious sauce that would be akin to Heinz Salad Cream. In fact Charlotte and I were actually excited at the prospect. We shouldn’t have got excited though as it was pretty crap. However, as a bit of English food history, it is interesting; it’s unbelievable how much our palates have changed. By the way, the sauce is a basic sauce that can (and definitely should) be flavoured with extra ingredients: tomato ketchup, anchovies, or whatever. I went for capers as we were having it with salmon fishcakes.

Sieve two hardboiled egg yolks and stir in one raw yolk and season with salt, white and Cayenne pepper and ¼ teaspoon of sugar along with a teaspoon of water. Gradually mix in ¼ pint of double cream and whisk until thickened. Now flavour with a little lemon juice or a flavoured vinegar. Lastly, add any additional flavourings. Dress the salad with the sauce - don't forget to slice the leftover egg whites to use in the salad. 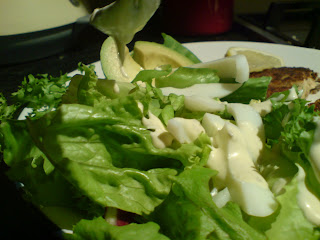 #170 English Salad Sauce. Not what I was expecting at all. Quite runny and unsatifying, bland and boring. We made taste okay with the addition of lots of seasoning and a shed-load of capers. Definitely give this a miss, tartar sauce, salad cream or mayonnaise would have been the best thing to have. Oh well, you can’t win them all – 3/10.

FYI: Eliza Acton (1799-1859) was a cook and poet. She was the first person write a cook book for normal folk, anmd was the first to include cooking times and ingredients lists in her recipes. Years later Mrs Beeton based her much more popular book on Acton's writings. Cheeky!
Posted by Neil Buttery at 2:22 PM