Aside from all the smoked stuff we bought at the Cheshire Smokehouse, we also got ourselves some nice desserts (and VERY nice they were too). To go with them I knocked up this very traditional brown bread ice cream. It’s an easy one as you don’t require an ice cream maker to make it, and is also the last of the ice creams in the book. It’s seems a little over-simplified as dry baked breadcrumbs are used – as far as I know it is caramelised breadcrumbs that give it a special crunch. Hey-ho – one must do as one is told.

I don’t know anything about its history – I know it’s very English, but I can’t find any websites that say how or why the addition of brown bread to ice cream came about. If you know, send me a comment! Ta.

First of all spread six ounces of wholemeal breadcrumbs on a baking tray and bake in a moderate oven until crisp – around 20 minutes. Whilst they cool, beat together ½ a pint each of double and single cream along with 4 ounces of pale brown sugar until it thickens and the sugar dissolves. Now mix a tablespoon of rum into 2 egg yolks and add that to the cream mixture and beat it in well (the rum is optional, but makes all the difference). Whisk 2 egg whites until stiff and fold those into the creams, and then lastly the cooled breadcrumbs. Pour into a tub and freeze. There’s no need to stir it. 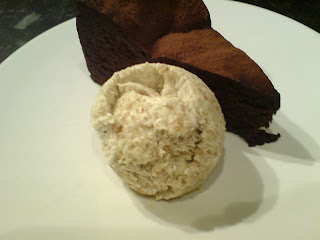 #167 Brown Bread Ice Cream – 6/10. A nice ice cream, but I was slightly disappointed; the brown bread, brown sugar and rum produced a lovely subtle malty taste, but because the crumbs were not caramelised with some sugar, they went soggy. I’m not sure why Jane doesn’t include this step, as it would take a good ice cream and transform it into a delicious one. If I were to make it again, I would caramelise the dried crumbs with a tablespoon or two of sugar and an ounce or two of butter so that they get really crisp before folding them into the cream.
Posted by Neil Buttery at 5:31 PM

5.5. could have been better, was a perfectly nice dish but it seemed a tad bland.

I can't find my recipe for this, but the breadcrumbs were caramelised just as you suggest... delicious! Other than being a victorian recipe, it's usually described as 'traditional'. Apparently it was common to have a taste of ice cream in between courses, so there must be hundreds of victorian recipes.

Yes I've heard the that they had ice creams between courses. I should try and hunt some out because I've done all the ice creams in the book now. Thanks for reminding me of this fact!