Sticky toffee pudding has got to be one of the best – if not the best – of all English desserts. It is quite a recent invention – a chap called Francis Coulson cooked it up, as it were, in 1948. For a pud that is just over 60 years old, it has become such a cornerstone of English cooking I cannot imagine life without it. It was created as an antidote to the lean post-war rationing, and was packed full of butter, brown sugar, cream and dates. Many people thought this was too much of an extravagance and were quite shocked by its richness. Curiously, Francis Coulson was the first hotelier in England to include a hairdryer in every room. Don’t say I never give you interesting facts.
Because the sticky toffee pudding is such a treat, I have been saving the recipe for a special occasion, and as Hugh was over in St Louis on a visit, I thought it very appropriate. I also invited some mates from work for some drinks too. I had never made one before, and crossed my fingers that it would be as delicious as the ones I have eaten in restaurants or purchased from the excellent Cartmel Village Shop in the Lake District. Good though the Village Shop is, have a go at making one yourself. You will not be disappointed.
Begin by greasing a 7 inch square cake tin with butter. Chop 6 ounces of stoned dates, place in a pan and pour half a pint of boiling water over them. Bring to a boil and then take off the heat and stir in a level teaspoon of bicarbonate of soda and leave it be whilst you get on with the cake mixture.
Cream together 2 ounces of softened butter with 6 ounces of caster sugar. Next, beat two egg and add them to the butter and sugar in stages. Fold in 6 ounces of self-raising flour, then the dates and their juices and half a teaspoon of vanilla extract (not essence, people!). Pour the mixture into the cake tin and bake for 30 minutes at 180°C (350°F).
Whilst it bakes, make the sticky toffee sauce by melting together in a saucepan: 7 ounces of soft dark brown sugar, 6 tablespoons of double cream, 4 ½ ounces of butter and half a teaspoon of vanilla extract. Simmer for around three minutes until a luscious sauce develops.
When the pudding is cooked, pour and spread a little of the sauce over it and put in the oven for a further 5 minutes. Cut the pudding into squares and serve it hot with more of the toffee sauce. Personally, I like it with either double cream or vanilla ice cream. 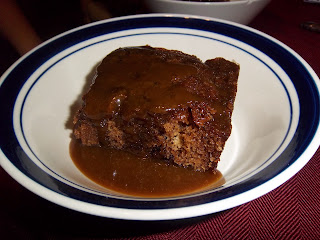 #309 Sticky Toffee Pudding. Without a doubt, the most delicious pudding from the book so far. The cake had become dark and sticky; the brown sugar preventing it from being too sickly. So good that I insist you go out and make this for yourself – no bought pudding could be as good as this. Fantastic, fantastic, fantastic 10/10.
Posted by Neil Buttery at 1:32 AM

Hey, I have made the sticky toffee pudding twice, however it seems to me the time in the oven should be nearly twice as long for the pudding to become sticky/firm. Am I doing something wrong?

Hello there, I haven't had any problems getting the pudding to bake. I have checked the oven temperatures and ingredients I gave and are correct.

Does your oven bake everything else ok? I had a weird oven once and had to invest in an oven thermometer because nothing baked properly. You're not mixing up your Farenheit and Celsuis are you?

Was that any help!?