“Provocative of indigestion as that pie may seem to you, it was put together by a lovely cousin at Melton Mowbray, whose fair hands are equally skilful in rendering a sonata of Beethoven, or in compounding the gastronomic mysteries of the kitchen.”
Excerpt from Dialogues of the Living – Table Talk by J Hollingshead,
appearing in The Train magazine, 1857
The pork pie is the ultimate raised pie in England and the best come from Melton Mowbray in Leicestershire, a very old English town, founded around the 8th Century. The Melton Mowbray hand-raised pork pie attained Protected Geographical Indication status in 2008 – this means that only pies made within Melton Mowbray can proudly bare the town’s name. If you buy a pork pie that doesn’t bear the name, then it is not the real-deal. Unfortunately, Cornwall missed the boat in getting their pasties recognized by the EU, so a Cornish pasty can proudly bear the Cornish name, when it was actually baked in Milton Keynes or whatever. 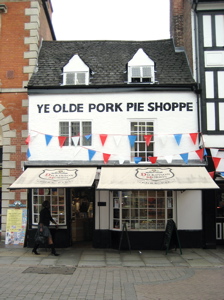 The Olde Pork Pie Shoppe -
the best place to buy a proper Melton Mowbray pork pie
So what makes a Melton Mowbray pork pie special, other than the location it was made in? Well, first they should be hand-raised, second the pork inside should be uncured and the bacon unsmoked. There is also a secret ingredient: anchovy essence. Anchovy essence is not widely available these days, but it is possible to find it. In America, you’ll have to order some from Amazon. You could cheat of course by using some nam pla – Thai fish sauce. There is no difference between them at all. Don’t be put off by this, the sauce gives the meat a delicious seasoning. In fact it is quite common to use anchovies in this way with lamb, and oysters are great in a steak and kidney pudding. We have stopped combining our fish and meat these days, yet have no issue when we eat them together when we order dishes from a Far Eastern restaurant. Strange.

The main difficulty for anyone who may want to attempt this recipe in the USA is not finding the anchovy essence – oh no – it is the unsmoked bacon that is the tricky customer. I hunted high and low for it when I was in Houston, but I never found wet-cured, unsmoked back bacon. I assumed that if I wanted to make a pie whilst living in the States, I would simply have to wet cure my own. However, at a Farmer’s Market in Chicago, I happened upon a stall selling not only unsmoked back bacon, but also traditional British sausages. The stall is run by an English chap, who coincidentally comes from Leeds too, called Nicholas Spencer. Check out his website here. He said he’ll be doing mail order soon, so I am looking forward to that.
Anyways, if you want to have a go at making your own traditional pork pie you need to get planning! It is quite an effort, though very good fun. I’ve already posted about making raised pies. In brief (with links) you need to get three things ready: hot water pastry for the raised crust, a jellied stock, and the filling itself. I’ll provide you with the recipe for the pork pie filling here…
First of all prepare the pork. You will need two pounds altogether  – boned weight. You need a cut of pork that is around one-quarter fat, so go for shoulder, leg or ribs. Make sure you get the bones form the butcher so you can use them in your jellied stock. Also at the butchers, get yourself an eight ounce pack of unsmoked back bacon. When you get home, chop the meat. Keep the best bits chunky, in around a centimetre dice, the other bits, chop finely. This is a bit of an effort, but it is this chopping – rather than mincing – that gives you the proper texture. Also, chop up two rashers of the bacon. Into a bowl, put in your chopped meat and mix in the following: a teaspoon of chopped sage, a teaspoon of anchovy essence and half a teaspoon each of ground cinnamon, nutmeg and allspice. Lastly, season well with salt and pepper. If you want to check the seasoning is correct, take a small amount of the mixture and fry it. Taste and correct accordingly.
When it comes to putting the pie together, use the remaining bacon to line the raised pie crust, add the mixture, packing it in well. 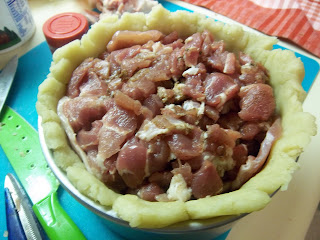 Cover with a pastry lid and finish it off, following the method in the raised pies post. 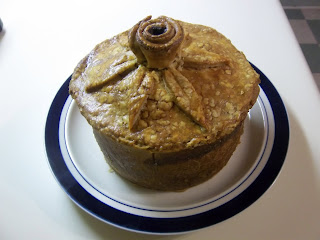 What should one eat with a pork pie? These pies are great for buffets and picnics, so eat whatever you are serving at your buffet or picnic… Personally, I like some nice brown HP sauce or maybe tomato sauce. Some like to warm the pies and have them with mushy peas. I have been eating mine with the preserved spiced oranges I recently cracked open – a really good combination that.

#312 Pork Pie. It seems you can never be let down by these raised pies. This one was great: the mild herbs and spices gave  the meat a subtly complex flavour. The idea of a cold meat pie feaked a few people out at work, and  suppose the jelly is something you either love or hate. I have been eating the pie slowly over the last few days, and it seems to get better as it ages. Very good, not quite as delicious as the Veal, Ham and Egg Pie, but still pretty tasty. 8/10. 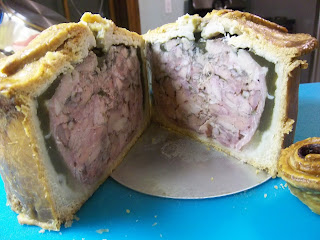 Alas Neil, you are too young to remember when Wright's pork pies were fit to eat and Yorkshire produced better pies than Melton Mowbray ever did. No Christmas was complete without the pork pie on the dresser

From my reading, I have seen many references to a pie called a Yprkshire Pie, though I didn't realise they were better than Melton Mowbray. I shall look into this... thanks Kathryn

Well...over twenty years ago, when I wasn't a pork pie love (I am now) I went to York and found a traditional pork butcher selling pies. It was in the historic centre area. They looked very good and I bought a selection to take home to my parents who I knew would like them. I took for some and my partner to eat on the train home. They were delicious. My Father remarked after scoffing his pies that he hadn't tasted a pie like it since before the war (WW2). So, there's a Yorkshire pork pie for you. Great blog and great recipes, thank you!

Thanks for the comment and I'm glad Yorkshire is doing me proud!

There is an infamous Yorkshire Christmas Pie that contains so many different meats - I hope to make one next year for the restaurant, but we'll see!