The second part of the traditional festivities: a home-made Christmas Pudding. Don’t know why I’m making it as it seems the whole world despises them, including Jane Grigson, herself. But like she says, English Food wouldn’t be a book on English Food without it included. It’s very easy to make, but requires a huge amount of steaming time; you have to steam them now, and again on the day. The mixture makes five pints’ worth, so I went for two two-pint basins and a one-pint. I’ve had to do mine in lots rather than all at once, so had to guess at the steaming times a bit, but I’ll talk about that when we get to it…

The recipe is not unlike that for the mincemeat; it’s just a question of mixing everything together in the order given. Use your hands to mix it up – it’s a lot easier than using a wooden spoon. Also, you can’t over-stir it, so get everyone in to give it mix. If I remember rightly, to get good luck, thirteen people have to mix it clockwise with their spoon and make a wish before you steam it (if you believe in that sort of stuff). Dry ingredients first: 10 ounces of fresh breadcrumbs, 8 of soft brown sugar, 8 of currants, 10 of chopped raisins, 8 of sultanas, 2 of dried mixed peel, 10 of shredded suet (the packet kind!), plus ½ teaspoon of salt and a teaspoon of mixed spice. Now mix in the grated zest of a lemon, a dessertspoon of lemon juice, 2 large, beaten eggs, ¼ pint of milk and a 300ml bottle of Guinness. Divide this between your pudding basins, that have been well-buttered (I’ve bought some of those plastic ones with proper lids so you don’t to bother with foil tops covered with tea towels, etc.). Add a sixpence if you want. Now for the first steaming…If you can fit them in one, then steam for 7 ½ hours – yes you heard me – SEVEN-AND-A-HALF!! If not, a bit of guess-work is required – did the 2 pint ones for four hours, and the 1 pint for three. Don’t know if it’s worked, we will just have to find out on Christmas Day! To store them, either keep them covered in a cool place or freeze them. 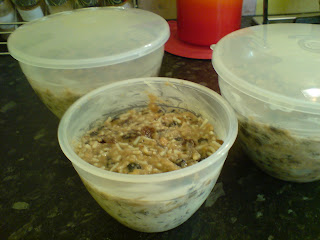 Yes I know they look bad in this state,

but they looked like proper puds when I'd done cooking 'em.

FYI: like mincemeat, the Christmas Pud was created as way of preserving meat, and the earliest recipe goes back to 1420, but it wasn't until the Victorians turned it into a proper dessert, did it become the familiar round shape topped with brandt butter, holly and flaming brandy. The stirring and steaming, traditionally occurred on 'Stir-Up Sunday', which was the first Sunday of Advent.

BTW in case you were wondering, Richard Boston was a food writer for The Guardian newspaper.
Posted by Neil Buttery at 4:19 PM

I also made this for Christmas this year; 1/3 of the quantities given by Grigson nicely fills a 1 1/2 pint pudding basin (feeds 4-6 people). I gave it the full 7 hours steaming, plus 3 on the day. I used fresh beef suet from my local butcher. The end result: a delicious, rich, succulent pudding. I'll definitely be making this again.

Glad that there's people following the recipes! I'm going to give updates on how everything turned out over xmas over the next day or two...

I'm really pleased to have found this.

We moved this year and Voston's 'Beer & Skittles' book got lost somewhere along the way. A quick search on google and you've come up trumps - the best Xmas pud I've ever tasted

I'm going to have to give this pudding another go. I wasn't that impressed!