A couple of weekends ago, Hugh and I popped down to Swansea for a wedding. It is a very nice city, with a very nice market. Whilst there I was very keen to get hold of some Welsh laverbread; there are a few recipes that use it so I bought a couple of tubs. I am always keen to try new foods and I had never eaten laverbread; always excited to see another species added to my list!
Laverbread does not contain any bread, but is in fact a species of seaweed found on the rocky seashore of Wales and is rarely seen outside of the borders. It is however, available online pretty easily if you’re not in or near Wales. 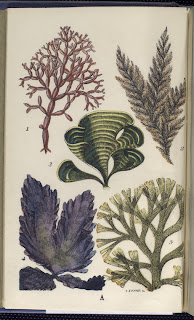 Plate from an unknown book - laver is number 4
According to my Traditional Welsh Recipes teatowel, to make laverbread, you need wash your laver (the algae Porphyra laciniata) and, without any additional water, simmer it until it becomes dark green gelatinous pulp – about 4 hours. Drain the leaves and chop them, adding salt to taste; and there you have it, laverbread, or bara lawr as the Welsh call it. Laverbread is traditionally fried in small balls or patties in bacon fat. It doesn’t take long because the laverbread is already cooked. 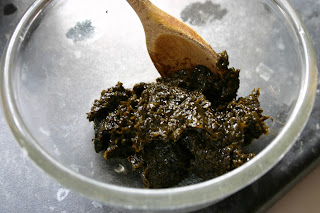 There are several seaweed based recipes in English Food, I have already covered one using the seaweed dulse, yet no one in England really eats it, and the tradition is slowly dying in the two remaining seaweed-eating nations in the British Isles: Wales and Ireland. In the past everyone used to eat it, but like many foods labelled ‘peasant food’ a stigma was, and still is, attached. It is strange that in most other countries people are so enthusiastic about their peasant foods – they are the comfort foods! – yet most of us turn our noses up at them.
Didn’t mean to get into a lecture there, but whatever falls out of brain ends up on the post. Anyways, as a rookie to the ways of laverbread and how to cook it, it went for this simple recipe that would hopefully be a good introduction.
Take a pound of prepared laverbread and mix in enough fine oatmeal to make soft, coherent dough. Roll into balls and flatten slightly. Fry in bacon fat for a few minutes per side or until nice and golden brown. 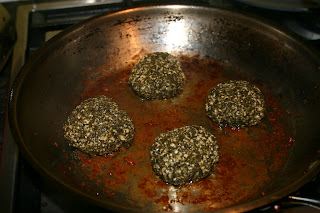 Serve with bacon in a mixed grill or a fried breakfast. I did something a little healthier and used the bacon I fried to flavour vegetable soup, and used the laverbread patties almost as dumplings.
#352 Laverbread and Bacon. Well I have to say I was impressed with the laverbread. I was subtly flavoured with iodine just as mussels and oysters are, but there was no fishiness to it. If I was living in Wales, laverbread and bacon would definitely be on my Sunday breakfast list. 7/10. 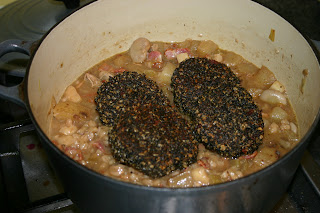 Traditional we also cook cockles with this dish in the leftover bacon fat with added butter if it's a bit dry. The best bacon to use is the Carmarthenshire which has a very high fat to lean ratio. from Debbie

I've only recently become a convery to cockles so I am keen to get hold of some laverbread to try it!