The Poor Knights of Windsor was a charity set up centuries ago by Edward III soon after he created the Order of the Garter in the mid-14th century to give alms to old and retired soldiers that had lived to protect the country. Quite ahead of his time, I think. How this dessert came to be called Poor Knights of Windsor I do not know. The earliest mention of this dessert I can find crops up in Elizabeth Cleland’s 1755 book A new and easy method of cookery. 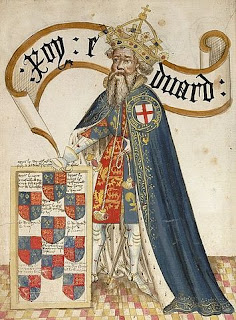 Edward III creates the Order of the Garter

Almost 2 years ago I made the 1420 version of this dessert, also called pain perdu. This medieval recipe gave reasonably precise instructions to make it (see here for that post). Perhaps surprisingly, this more recent recipe from Ambrose Heath’s 1937 book Good Sweets, is rather scant on instruction:
Cut a French roll in slices and soak them in sherry. Then dip them in beaten yolks of eggs and fry them. Make a sauce of butter, sherry and sugar to serve with them.

Brevity is obviously his middle name. Here’s what I did…

First I took some of Jane’s advice and that was to use not just any old French roll, but a nice, rich brioche (like it wouldn’t be rich enough without!?). Although brioche wasn’t around much in the 1970s it is widely available these days.

I beat a couple of egg yolks with a little water just to make them easier to work with. I took a slice of brioche and sprinkled it liberally with dry sherry, then dipped it in the egg yolks and fried them on a moderate heat in a frying pan with butter. I kept the poor knights warm in a low oven whilst I got on with making the sherry sauce.

I melted 2 ounces of butter slowly in a small saucepan, then I turned up the heat and stirred in a tablespoon of sugar.  When it had dissolved and was bubbling away, I added 2 tablespoons of dry sherry and that was it! Very simple indeed.

I served up the poor knights with a little of the buttery sauce drizzled over them.

#349 Poor Knights of Windsor (1937). It’s not very often that I make a recipe from the book just for myself, but  this one I did. I thought it would be awful – I don’t usually like alcohol in desserts, but I was so, so wrong! It wasn’t as rich or as heady as I expected, the secret was to make the sauce very sweet and to liberally sprinkle the brioche with the sherry, rather than soak it. Very good 7/10.
Posted by Neil Buttery at 10:11 PM

As a sucker for good French toast, how could I resist? Plus, how exciting to serve something with a name like "Poor Knights of Windsor"? Although, I don't know how poor they could be if they're made with brioche and sherry!

I know, right? The food and the name are so incongruous. I wish I could find why they were brought together....