Here’s a quickie from the Beef & Veal section of the Meat chapter and I shall Jane Grigson herself tell us what to do for this one:


Allow one large, thin, escalope of veal for each person. Spread it with a thick layer of parsley and lemon stuffing, or herb stuffing and roll it up starting with one of the long sides. 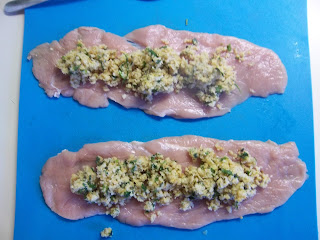 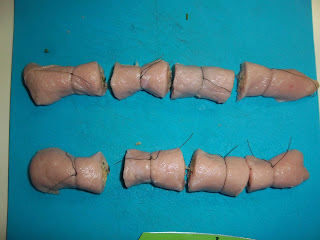 Brush each piece with beaten egg, dip it into flour and string it on a skewer, one skewer for each person. Grill for 20-30 minutes, preferably on a spit, basting them from time to time with melted butter. Serve them with fried mushrooms and lemon quarters. 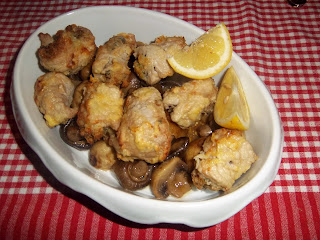 #348 Veal Rolls. Well these were a little fiddly to make but not infuriatingly so. I used the parsley and lemon stuffing as I hadn’t made it for a while and I thought it would suit the hot weather we’re having here in St Louis. As much as I like veal, I didn’t find this really worked. I tried to keep the rolls basted and evenly-cooked under the grill, but the whole thing turned out a little dry. I would much have preferred to have had the escalope fried in some butter with stuffing baked in an ovenproof dish served separately. The mushrooms were good though! 4/10
Posted by Neil Buttery at 4:10 AM