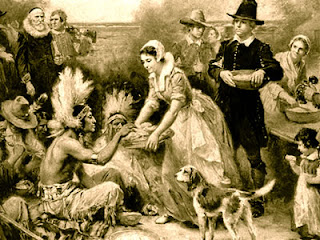 "Eat up brave warrior, for tomorrow we're burning down your village"
Thanksgiving Day is just around the corner here in the USA so I thought the next two posts will have a Thanksgiving theme. I knew that there would be little chance of replacing the turkey on the day, but I wondered if cooking it in a different way might be possible. Plus if anyone reads this near Christmas, they might want to give it a go.

This is a classic: ‘A favourite dish of the Victorians and quite rightly so, because it is delicious – mild without insipidity’, says Jane. In fact, that is all she says on the dish. Boiling turkey was a popular way of cooking fowl, perhaps because it takes little time to cook; two hours maximum for a 15 pound turkey. I hoped it would make it deliciously juicy and tender. I did worry, however, that boiling it would sap what little flavour a turkey has even at the best of times.

The earliest recipe for boiled turkey with celery sauce I could find goes back to 1777 – it appears in a book by Charlotte Mason called The Lady’s Assistant to Regulating and Supplying her Table… (the full title is much longer than this!). More familiar contemporaries, Hannah Glasse and Elizabeth Raffald, also give recipes. Here’s a top-tip from Raffald:
“Let your turkey have no meat the day before you kill it. When you are going to kill it give it a spoonful of alegar [malt vinegar], it will make it white and eat tender.”

So there you go.

I didn’t expect the recipe to go back much further as the turkey, being from the New World, would have entered Europe until the late fifteenth century at the earliest. However, I was wrong – it was celery that was the latecomer in England, appearing in the middle of the seventeenth century. Strangely, the earliest recorded mention of the turkey in Europe was in an account book from 1385; Phillippe of Burgundy enjoyed a roast turkey in one of his luxurious banquets. How on earth did it get there, I wonder?

Why we call these birds turkeys has always troubled me – after all they aren’t from Turkey. Nobody is sure, but it seems that the first English turkeys were brought to Britain by travelling merchants that had been given the gift of the birds after eating some whilst on a business trip to Turkey. So somehow the birds came from the New World, via Turkey, all before the New World was even discovered!

So if you fancy having a change from roast turkey, but want to keep to tradition give this recipe go:

The first thing you need to do is to get hold of a pot large enough to fit your turkey breast-side down. You need a turkey that weighs up to 15 pounds. Once your turkey is nestled in its pot, tuck in the following vegetables and aromatics: 4 sliced, medium carrots; a sliced, peeled turnip; a sliced stick of celery; three whole, unpeeled onions, each studded with three cloves; 15 crushed peppercorns; two bay leaves; 4 thyme sprigs; a bunch of parsley stalks; and a heaped tablespoon of salt. Then, add enough cold water to only just cover the legs. 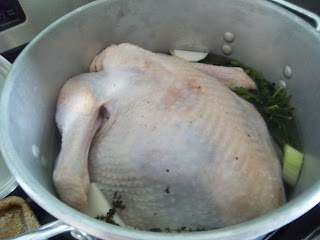 If the turkey is smaller – and therefore younger and more tender – you can use less water. Cover and bring to a boil, then turn the heat down so the pot is only just simmering; a bubble or two every now and again is what you want. The turkey will be ready in up to two hours. Mine was ready in about 90 minutes. You can tell it is ready if the leg can be easily pulled from the body.
The sauce can be made while the bird is cooking, or it can be made ahead. You need to start by making three quarters of a pint of béchamel sauce. Next you need a whole head of celery. Remove and separate all the sticks and string them. This is easy to do: simply peel the backs of them, following the strings. 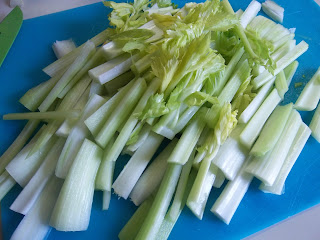 Cut the celery into strips and simmer them in salted water until they are tender, but still a little under-done. Around ten minutes should do you. Strain them, and return them to their pan with three ounces of butter and stew them a little longer. 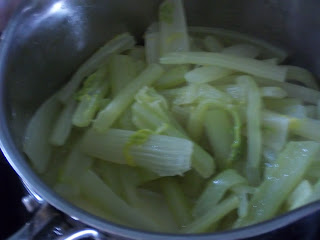 Add the béchamel sauce and bring it and the celery to the boil. Next, liquidise it all and stir in a quarter of a pint of double cream. Season with salt and pepper.
The most difficult part of the recipe was to get the turkey out of the pot without putting myself or one of my guests in the nearest burns unit. Griggers suggests using a ham kettle, but I only had a stock pot. I poured as much of the stock out as I could (reserving it of course, for a future recipe). Then, I lay the turkey on its side in its pot and Devin coaxed it out onto its serving dish with some wooden spoons. 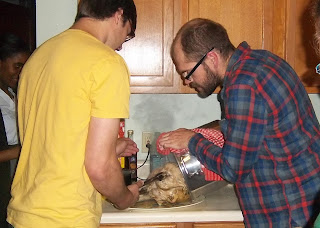 "It's a boy!"
It certainly didn’t look like an appetising thing, but hopefully appearances were deceptive… 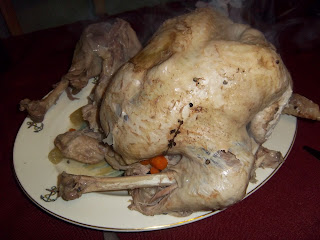 This was its good side... 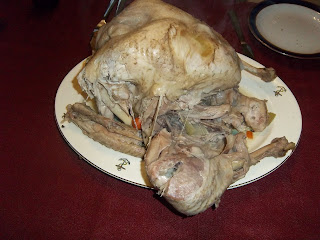 ...and this was its bad.
#314 Boiled Turkey with Celery Sauce. Well I have to say it was very good: the meat was tender, though the breast still managed to be a little dry. The leg meat was perfect though – in fact it was the best leg meat I have eaten on a turkey. The celery sauce too was good, and Griggers was right when she said it was a ‘mild’ dish. I was good and homely food, perfect from the autumn and winter months, though I have to admit, I did miss the roasted taste and the crispy skin. Still very good though. 7/10. 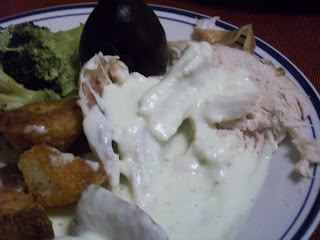