With Thanksgiving just around the corner, I thought I would have a stab at this jelly so we could have the traditional accompaniment to our Thanksgiving dinner. Even if it wasn’t Thanksgiving, it would have been the cranberry jelly I chose from the four possibilities; the other three not being available in the USA. It isn’t strange that the cranberry is on the list of fruits here: we Brits have been eating cranberry jelly with our turkey on Christmas Day for ages now – since the end of the nineteenth century. Prior to that, people either had goose (for Southerners) or beef (for Northerners), but they still may have had the jelly.


In America, of course, cranberries and turkey were two of the foods eaten at the first Thanksgiving dinner and they have become traditional and necessary fayre. They were not the only foods eaten on that day though; the feast also consisted of cod, eels, bass, clams, lobster, mussels, ducks, geese, swans and venison. I wonder why the turkey endured but the others did not. I’d quite happily tuck into some nice roast swan.


The four fruits that can be used in this recipe all have one thing in common: they are very tart and therefore great to go with fatty foods like roast turkey, goose, ham and the like. 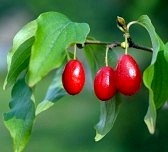 Cornel cherries are not cherries at all but the fruit of a dogwood tree. They are only really used to make jellies in Britain, though other countries use them to flavour spirits. You can buy dried ones in health food shops these days as a super-food, but are unlikely to find them fresh in shops. They are native to Europe so you might just find some growing wild. I am no botanist, but I will keep a look-out for them on my return to Britain. These seem to be Jane Grigson’s favourite out of the four as it’s the only one she actually mentions in her little introduction to the recipe.

Rowanberries – the fruit of the rowan tree – on the other hand are very familiar. Rowans must be one of the most common trees in Britain; equally likely to be found in forests, parks and gardens alike. I envisioned making this jelly using rowanberries, who’d have thunk I’d end up in America? Rowanberry jelly is traditionally eaten with venison or lamb. It seems crazy with so much of it just growing wild everywhere it isn’t put it to good use. Next Autumn I will make some.

Bilberries are more common in Scotland and Ireland than England and Wales, though some are found in the northern climes. They are similar to the American blueberry, but they are much darker and have a very dark blue flesh. If you can’t find any bilberry bushes, you might be lucky to find the fruit at farmers’ markets, but they’ll probably cost you an arm and a leg; they spoil easily and the plant cannot be cultivated with much success. The bilberry is the only fruit of the four that can be eaten unsweetened.

It might surprise you to learn that the cranberry is not a New World fruit (it surprised me!). There are several species of them around the globe. When we think of cranberries we think of the large plump ones from America, but two species are found in the UK and are smaller, paler and more tart that their American cousins; one is found across the whole of the country, and the other is just found in Northern Scotland. If you buy cranberries at a supermarket, however, they will be the American species.


Whichever fruit you choose make sure you give them a good wash and pick out any bits of twigs and leaves. Weigh them and then cut up the same weight of apples – don’t peel or core them though, just chop them up. Use a tart apple; Bramley or Cox if you are in Britain, Macintosh if in the USA. Put all the fruit in a large pot and cover with water. 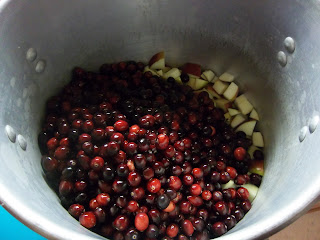 Bring it up to the boil and simmer until the whole thing has become a nice mushy pulp. Whilst it is cooking, set up a jelly bag over a bowl. If you don’t have a jelly bag and stand, use a large piece of muslin or even a pillowcase. Ladle the mush into the muslin and let the clear juice drip through. 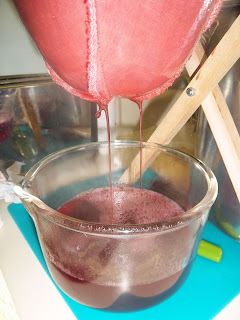 It is best to hang it on a cupboard door if you don’t have a stand. Be patient now: if you add any pressure to the pulp it will make your jelly cloudy. On the other hand, it will make it more flavourful, so it is a trade-off. Grigson goes for the squeeze. I did not, for these cranberries were not precious, but bilberries for examples are, so I would want as much flavour as possible.


When the juice has dripped through, measure the amount of juice you have, return it to a cleaned pan and add a pound of sugar for every pint of juice. Bring to a boil and then to ‘setting-point’. Setting point is when the natural pectin in the apples and berries forms a gel. To achieve this, you need to get the temperature to 104⁰C (221⁰F) and keep it there for a few minutes. If there was a lot of water in the juice, it will take a while to reach the correct temperature. If you don’t have a thermometer you can use a cold metal spoon – dip it in the boiling jelly and push with your finger, if it wrinkles, the juice is now a jelly. If you turn the heat down under the pan, you’ll also notice the surface trying to gel over. Skim off any scum that the jelly produced and pot into sterilised jars. To sterilise jars, put them and their lids on a tray in a cool oven for 35 minutes. Soak any rubber seals in boiling water. 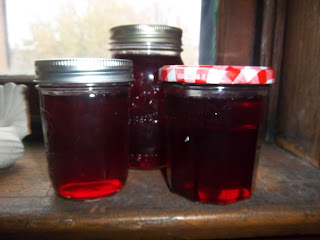 #315 Cornel Cherry, Rowanberry, Bilberry or Cranberry Jelly. This was a very good jelly – nice and tart and not overly-sweet like some of the bought ones are. It is a shame that I didn’t pick any from the wild, but never mind. It’ll be good with turkey for Thanksgiving and all the other meats and cheeses I’ll be eating on the lead up to it. There’s something very satisfying about making jams and jellies, I think it is because there are just three ingredients – fruit, sugar and water – and they magically become transformed into delicious, clear rubies shining away in their little jars. Pretty and delicious. 8/10 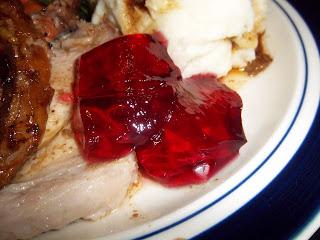