Well here it is, Merry Christmas, everybody's having fun. Well we are here in Pudsey, Leeds because - as for most of the UK - we are having a proper white Christmas.

Hope all of you are having a good one.

The plan this year is to not have a turkey, but three different meats: ham, beef and pheasant. We all decided as a family to not do turkey, but now the time is here there are some that are having a bit of a complain. Well tough tits - you should have piped up at the time.

So the the first to report is the Bradenham ham from Dukeshill. I actually did this for Christmas Eve dinner and that's why it is being reported to you good fellows.

Bradenham ham is apparently the best of the dry cured hams - so good in fact that the Queen has it every year herself. It's quite pricey, but it is Christmas.

The story of the creation of the Bradenham cure is that the Lord of Bradenham invented it in 1781 - so it is pretty old - but his butler took umbrage saying he had invented it and nicked the recipe. What a card. Anyways, he stowed the recipe to Dukeshill and they still make it today. It is dry cured for 3 months in a briny bath of spice, molasses and cochineal of all things. 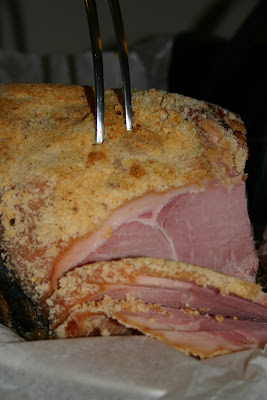 The hams can be bought whole or in halves. I went for the half ham as the whole one is absolutely huge and I had to buy a huge pan for the half one anyway. Griggers gives instructions for a whole ham so I had to go for the cooking times give by Dukeshill themselves.

Start off by soaking the ham in cold water for 2 days (Griggers reckons four, but since mine is half the size, I went with Dukeshill method. Put the ham in a large pot and cover with water. Add half a jar of mollases and half a hanful of pickling spices (double up, if a whole ham). Bring slowly to a bare simmer and then turn very low on the hob and allow to keep ticking over for 20 minutes per pound.

When done, remove tentatively from the opt and remove the black skin. Cover the sticky fat with breadcrumbs and bake in a medium oven until they go nice and brown. Allow to cool. Serve the ham sliced with nice mustard or Cumberland sauce.

#213 Bradenham Ham. Absolutely delicious; very salty and very sweet. The spices are sublime. When you eat it, your mouth waters. Alot. It may be pricey, but it is worth it. The only problem was that because I bought a half ham, some meat - rather than skin - was exposed to the water and dried out a little. However, anything behind fat or around bone was deliciously moist. If you buy one and you don't want a whole one, buy an already cooked one instead, I reckon. 8.5/10.

I have more to report over the rest of the festive period. Hope you are all having a great time and eating good food.

FYI: to make your own pickling spice mix use: 2 teaspoons each of black peppercorns, allspice berries, coriander seeds, cloves, mace as well as two dried chillies and two pieces of dried ginger.
Posted by Neil Buttery at 11:51 AM

Any recipe that starts with 'soak for two days' is alright by me. We ate an interesting traditional Christmas dish here in Nicaragua- 3 chickens were freshly killed, boned and delt with, but the skins were kept intact. Cooked chicken (and the kidney, heart etc that they don't waste here) was mixed with rice, oil, carrot, peas, onion, Worcester sauce (salsa inglesa, then the mixture was stuffed into the skins and sewn up. While they cooked slowly in a clay oven the rice swelled and the chickens ended up full and in the shape of whole chicken. Yum. And we made ginger pudding with rum sauce. Yummy. Merry Christmas.

There's a recipe in English Food thAT USES THE NECK SKIN From a turnkey or goose that sounds very similar. not done it yet but will do soon. you'll have to pass on the recipe!

my mother, aged 80, decided there would be no more turkey and no more "goddam vegetables" at christmas. so we streamlined it down to duck, pate, mustard fruits, and lemon pie. or, instead of pate, scalloped oysters. these were very fine feasts indeed -- and yours of the ham and non-trad three meats also sound marvelous.

merry christmas and thanks for all the good cooking!

Merry Christmas to you too purejuice! hope your xmas has been a good one. it'll be amazing if we don't have turkey next year though!

Sarah from Dukeshill here. Just wanted to say how pleased we all are at Dukeshill to hear you enjoyed the Bradenham aka Shropshire Black ham this Christmas. We sold out of them again this year so they must be popular. You're definitely one of the braver customers to go for an uncooked one, although we always have a die-hard fan club of enthusiastic cooks who insist on soaking and cooking their own.

Just wanted to point out that there is NO cochineal used so I don't know who mentioned that to you. The only things used to cure the pork are salt and salt petre, followed by the marinating in the molasses, juniper berries and spices finally followed by the maturing for three months to obtain that fuller flavour.

Thanks once again for your custom and your comments and I hope you'll try us out again for some of our other hams and foods.

Aagh! word verification doesn't like me - I'll try again. I'm gradually working back through your old posts and found this. Didn't realise Bradenham ham was still made. Discovered it back at uni in the sixties when Colchester was real food central. Thanks for the info - now I have to work out how to get it to Ireland.
Also didn't realise you are from Leeds - its that growing up in Leeds market thing that makes a real foodie :-)

Ah Leeds Market. Unfortunately it isn't what it was. I recently went back and was quite disappointed with it. Maybe I went on the wrong day or something. I remember as a kid thinking it was amazing - especially the fish market. It's shrunk in size these days though