I have a few things up my sleeve for Christmas but for now I can only report on two things: the orange mincemeat I made last month and something to go on them (or your Christmas pud): Cumberland rum butter.

First up, the mincemeat. I have given the recipe for them already and also reported upon the Griggers way of making mince pies properly, which is how I make them now. All I have to do is give them a mark.

#206 Orange Mincemeat. Well, the orange mincemeat is ten times better than any bought stuff, the three types of booze must help. The mincemeat is not as orangey as I’d hoped, but still great. The best thing is, and it’s the same with the other recipe, is that it is not too sweet. Have a go, but the better is the Beeton. 6.5/10. 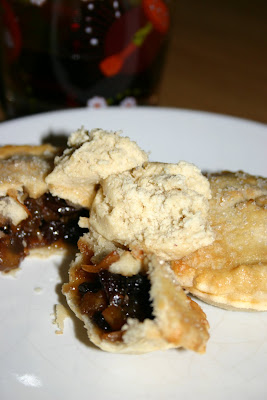 I have already made a brandy butter and it was good, but I thought I’d try this Cumberland rum butter – I had higher hopes for it as my favourite spirit is dark rum. Have a go at this, or the other brandy butter recipe, it’s very easy, just requiring some simple creaming and mixing.

Cream eight ounces of unsalted butter until pale and fluffy. Beat in six ounces of soft brown sugar, three tablespoons of rum and a good grate of nutmeg. That is it! Serve on mince pies or Christmas pudding, or even with warm oatcakes, which is how the folk of Cumberland served it, apparently.

#211 Cumberland Rum Butter. Really delicious. Not too sweet and sickly, the dark rum and dark sugar give it a bitter-sweet note. Great stuff. 7/10.
Posted by Neil Buttery at 9:09 PM