This Christmas – 2009 – was the year we did not have turkey. This was the first time ever, and I have to say it wasn’t missed (at least not by me, anyway). Instead it was roast pheasant and roast beef, not any roast beef though, but roast sirloin. Griggers says that if you cooking beef for a special occasion and you want to be sure of good beef, go for this cut. She suggests getting it from Harrods, but I didn’t go that far. Instead I went to a very good butcher’s shop in Pudsey, my home town, called Bentley’s. It’s won many an award so I thought I would mention them.

A roasting joint such as this needs little doing to it – place it in a roasting tin and season the fat with saltr and plenty of black pepper. Place in a very hot oven – turn the heat as high as possible and leave for 15 minutes, turn the oven down to 180⁰C and roast for 15 minutes a pound for rare meat. Serve with the usual horseradish etc. 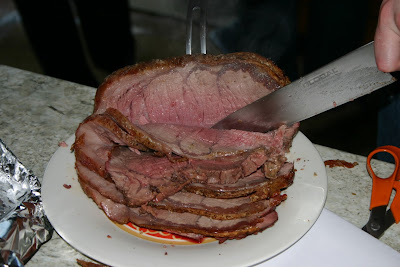 FYI: I bought a meat thermometer so I could be absolutely sure of perfectly cooked meat. I did it medium, though I would have done it rare if it were just me eating it. If you have one then follow these temperatures: up to 60⁰C gives you rare beef, 60-70⁰C gives you medium and 70+⁰C gives you well-done beef.

FYI2: there is a common story about Henry VIII eating loin of beef at a banquet and thought it was so delicious that pronounced it ‘Sir Loin’. This is unfortunately a lot of nonsense, though I wish it were true. This cut of beef got its name is from the French sur loin, meaning above the loin.

#213 Boned Roast Sirloin. This was the best roast beef I’ve ever had in my life! It was as soft as butter and tasty and all the better for adding only salt and pepper. No messing about with extras here. It beat the rib of beef hands down. Absolutely gorgeous. Go cook some next time you have something special to celebrate – this is an order! 10/10

is this the first?

Doing a roast beef here in Nicaragua on New Years Day. You can't buy joints of beef at supermarkets or most butchers but over here there's always a way and we've found someone who will supply us with an 8lb piece of 'lomo'. Will let you know how we get on. I'll also be pestering you for Yorkshire Pudding tips.

I have a good yourkshire pudding recipe on the blog - not the official grigson one, but my own. have a look down the index.

purejuice - this is not the first 10 i've given. i gave full marks to shin of beef stew i tihnk and game pie too.