Attempting the poultry section in English Food has been a paltry effort by me, but I intend to address this, people. I thought I’d start with one of the two duck recipes. This one, where the duck is stewed with a shed-load of mint seemed right up my summery alley. It also has the added bonus of a sauce paloise, which is very similar to a sauce béarnaise (except tarragon is substituted for mint) and uses a hollandaise sauce as its base. Now proficient in hollandaise sauce making, I was eager.

Apparently the French think it is hilarious that we have mint with our lamb, when blinking Johnny Foreigner goes around eating sauce paloise here there and everywhere with their duck! Only joking Frenchies, I loves ya really!

To make this, season a large duck inside and out with salt and pepper before stuffing its cavity with a whole bunch of mint. Next, wrap the duck in a large napkin or double-wrapped muslin. Half fill a large pot with water and add a large quartered carrot, a large onion studded with three cloves and a stick of celery. Bring it to the boil and then place the duck in and leave it to simmer, covered, for 2 ½ hours. When cooked, remove the napkin and place on a serving plate surrouded by mint leaves.

Start making the sauce around half an hour before the cooking time is up: Into a small saucepan add a tablespoon of chopped shallot, two tablespoons of chopped mint, a tablespoon of chopped chervil, a sprig of thyme, a quarter of a bay leaf and four tablespoons each of dry white wine and white wine vinegar, plus a good seasoning of salt and pepper. Boil down this mixture, until it has reduced by two-thirds. Allow to cool. Now place the mixture in a bowl and beat in three large egg yolks. Place the bowl over a pan of simmering water and beat in six ounces of unsalted butter bit by little bit. Season with lemon juice and more salt and pepper if required. Finally, stir through some freshly chopped mint leaves. Pour into a salad boat. 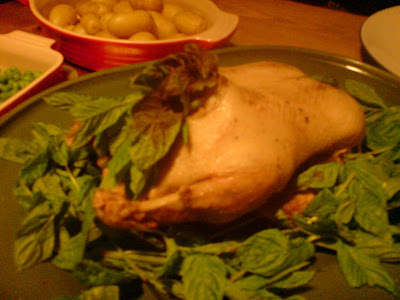 FYI: Chervil is tricky herb to get hold of, so instead of using it you can use the small yellow leaves from the inside of a bunch of celery, they provide a very similar flavour.

#178 Duck with Mint. If you don’t like mint, this is not the recipe for you. However, I love mint and it was just the thing for a summertime Sunday dinner. The duck was tasty, though a little dry, but the rich and tart sauce married with it perfectly well. In fact, the sauce paloise was the star of the show. I think it would go very well with lamb or even fish. The Medieval look of the birs with all the mint leave in and around it, was quite impressive too. Overall, I think this deserves 7.5/10 (though the sauce would be 9/10+ if I was marking it separately).
Posted by Neil Buttery at 4:51 PM

7/10. this looked impressive when it was carried through to the dining room. i liked the duck-mint combo, worked really well, and the sauce was a joy to the palate ! pulled it all together nicely. lovely