#175 Shoulder of Lamb with Rice and Apricot Stuffing

A dish with a Middle Eastern or North African influence, it seems like a very tame version of a lamb tagine with its spices, nuts and dried fruit, that has been very Anglicised. These days, we don’t need our food tempered down to suit our bland tastes; we like our foreign foods to taste traditional. However, as always new foods get invented, reinvented or modified dependent upon the country you are in and it is certainly no bad thing (think, chicken tikka masala and spaghetti Bolognese). This is a simple recipe that is excellent for a Sunday roast in the summertime – it required very little attention as you can make the stuffing, stuff the lamb and bung it in the oven whilst you go out for a nice walk or sit in the sun.

Also: I bought the lamb from Axon’s of Didsbury, South Manchester – it was of very good quality indeed, as was the pork ribs and sausages we bought too. If you are ever in the area, make sure you visit. They make their own sausages and also butcher veal – very rare these days. The man was very friendly and even gave us some extra pork ribs free. I think they may be my new favourite butcher.

To begin with, you need to make the stuffing. Boil 8 ounces of long grain rice in salted water until cooked. Drain it and put it in a bowl. Mix in 4 ounces of dried apricots ( you may need to soak them first), 2 tablespoons of seedless raisins, 2 tablespoons of slivered almonds, half a teaspoon each of ground coriander, cinnamon and ground ginger, plus plenty of salt and black pepper.

Now get the lamb ready – you will need a boned unrolled shoulder of lamb. Lay it out, season it, and then stuff it with some of the rice mixture. The best way to do this is to put the stuffing where the bones used to be. Grigson says to sew up the pocket where the bones were, but I found that I didn’t need to. Roll up the shoulder and secure it well with two or three pieces of twine. Weigh the lamb and place it in a roasting tin and brush it with melted butter. Season it well. Roast at 190°C for 30 minutes per pound plus an extra twenty minutes. When cooked, remove from the roasting tin and let it rest on a serving dish. Put the tin over the hob and add the remainder of the rice stuffing. Turn it around in the juices and let it reheat. Spoon it around the lamb and serve. We had it with a green salad dressed with a simple vinaigrette. 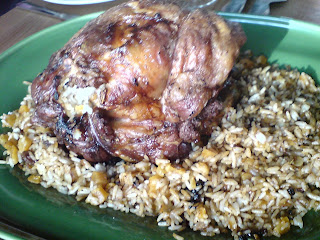 #175 Shoulder of Lamb with Rice and Apricot Stuffing – 9/10. Although I slightly mocked the dumbing down of flavour for the English palette, I found this recipe brilliant – it was simple, yet there were massive returns. The lamb fat was crispy on the outside and the meat beautifully tender within and the rice gave a sweet-sour flavour that cut through the rich lamb very well. It’s very difficult to knock this – especially when you have bought it from such a reputable butcher as Axon’s.
Posted by Neil Buttery at 5:21 PM

9/10. mmmmhmmm, this was delicious, one of my favourites so far. The meat was tender with the tastiest lamb skin and fat i have ever had !
the rice and apricot stuffing finishing it off nicely with a delicate sweet edge to it all. lovely !