The fishmonger in the Arndale Centre in Manchester was selling sea bass for £1.50 each! What a bargain. I know that they’ve probably been dredged up by one of those massive trawler nets and by buying them I’ve surely helped seal the fate of several marine species, but ignorance is bliss so I won’t try to find out.

To go with the sea bass, I had samphire (see previous entry) and also made some hollandaise sauce. Not technically English, of course, but we’ve used it for so long in our cuisine it seems English – more English than, say mayonnaise anyway – and it is one of my favourite sauces. The trouble is, me and hollandaise has a chequered past; it’s a tricky sauce that is either amazing and delicious, or splits and is awful and goes in the bin. My success rate is around 50%. Griggers’ recipe is slightly different to the classic way of making it as it doesn’t use melted butter, but uses cubes of butter added gradually instead? Is this a foolproof recipe? We shall see…

FYI: hollandaise sauce first appeared as simply melted butter in eighteenth century France, but soon became the complex emulsion of butter and egg yolks we know and love and was added to the list of mother sauces of French cuisine by Escoffier in the early twentieth century (the others being béchamel, veloute, espangole and allemande).

This is the Griggers method (you can multiply up or down depending upon how much you need to make): 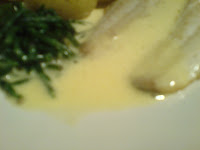 Begin by boiling down 3 tablespoons each of water and white wine vinegar and 10 crushed white peppercorns until just a tablespoon remains. Strain it into a bowl and allow to cool. Bring a pan of water to a simmer and place the bowl over it. Beat in three large egg yolks and beat in 6 ounces of unsalted butter bit by bit using a wire whisk. Do not over heat, or the eggs cook and the sauce splits. Season with salt and lemon juice.

#177 Hollandaise Sauce – 9/10. Well that was easy! This may be the fool-proof method I have been after (either that or it was a fluke). The sauce is beautifully rich, with a piquant tang of lemon and vinegar that cut through it so well that you easily drink a pit of the stuff. My only gripe is that this method doesn’t seem to make a very thick sauce, but that is being very nit-picky.
Posted by Neil Buttery at 4:18 PM

8/10. mmmmmmm, really tangy and tasty. perfect with the sea bass.