Many years ago when I began this blog, I winced in fear at prospect of eating brains but after scoffing sweetbreads, wood cock intestines, lamb’s head and jellied eel mousse, the prospect has become an exciting one. The only reason it’s taken me such a long time to cook the brain recipes in this book that you have to order a huge box of them – it’s how butchers buy them from their suppliers and they’re not going to be able to sell the rest of them after you have bought the one or two you need for your recipe. Of course, these days I do my pop up restaurants and so thought it’s about time they appeared on the menu. When it comes to recipe-testing, I always look to Jane first, so I cooked the two brain recipes in quite quick succession.


If you want to try and cook calves’ brains yourself, find a good butcher and ask for a box of brains. You’ll probably receive ten in all, but give him plenty of notice as it could take a couple of weeks for him to get his hands on them.


Before I go on with the recipe, a few words on the preparation of brains: 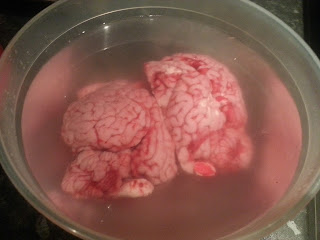 First, you need to get them ready for the pot by removing any pieces of bone and then gently peeling away the thin membranous network of blood vessels that surround the brain. To do this, you need to soak the brains in salted water for a few hours in the fridge, preferably overnight. This toughens up the membrane so that it peels without breaking so easily. This is a little fiddly to do, but you soon get the knack. You might find it easier to do it under a running tap. Large calves’ brains are difficult to hold in one hand, so cut them in half. Better have two, neat hemispheres than a dropped, destroyed whole. With a little perseverance, you should end up with a nice, milky-white very delicate brain ready for the next stage. 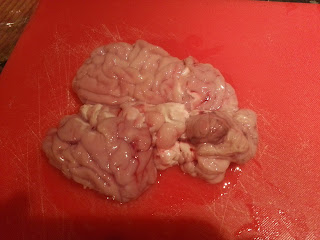 The prepped brains can now be very gently poached in milk for five minutes so they get nice firm (if going by Jane’s exact words, but a good court-bouillon is a good other option), then cut up appropriately.


For this recipe you’ll need 1 ½ pounds of calves’ brains (about two) that have been poached in milk and cut in slices about 1/3” thick. 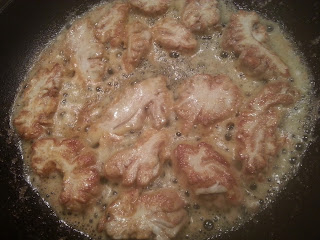 Swiftly fry them in some butter over a quite high heat so that the brain browns nicely, whilst they remain nice and soft inside. Keep them warm in the oven as you make the sauce by first melting a good 3 or 4 ounces of butter. Soon it will start to sizzle and froth, but then it will go silent. This is the point at which all of the water has boiled away and the butter solids will soon start to change colour. Timing is critical now; ready yourself with 1 ½ tablespoons of white wine vinegar and wait for the pale solids to turn to a deep golden brown. As soon as they do, take the pan off the heat and pour in the vinegar, swirling the pan as you go. Add a heaped tablespoon of capers and level tablespoon of parsley and season with salt and pepper. 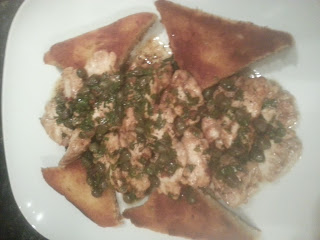 Jane suggests serving the sliced brains on a bed of cooked spinach with the sauce spooned over the top, surrounded by triangles of bread that have been fried in butter.

The photographs are not really doing the process justice. I really need a better camera!


#409 Calf’s Brains with Black Butter. Well I must say this was absolutely delicious! The soft and slightly-sweet brains were contrasted excellently against the fried bread, and the piquant sauce provided the dish with plenty of oomph, which bland brains need I think. I cooked an adapted version of this for a pop up restaurant by making it into a warm salad; every single plate came back clean. What a shame they have gone out of favour these days, perhaps now that the shadow of BSE no longer looms too darkly, they will begin to sneak back into our butchers’ shops again? Get your hands on some and have a go; fun to cook with, and a true gastronomic experience! 9/10 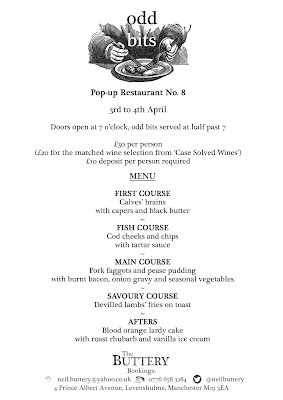