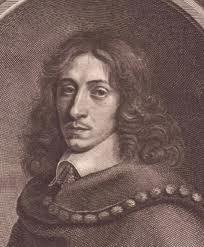 John Evelyn was a very influential diarist who left quite a legacy. He was from a well-to-do family in South-East London, but being the second son, had no rights to the estate (unless his brother died without having a son himself). So, to make up for this he decided to become a scholar and travelled France and Italy in search of knowledge during the tumultuous time of the English Civil War. He wrote several books, witnessed the Great Fire of London, and was friends with Christopher Wren and Samuel Pepys. He lived during the reigns of Charles II, James II and William III and Mary II. He was talented landscaper, designing the gardens at Sayes Court, London. He became quite chummy with Charles II and was a founding member of the Royal Society. One of his books, called Sylvia, or a discourse of Forest Trees declared the tragedy befalling the country’s trees that were being felled for fuel to the glass factories. The book was responsible for the planting of millions of trees – quite the modern conservationist! 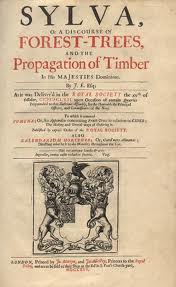 During his later years, he planned to write an encyclopaedia of horticulture, but only got as far as the first chapter. This chapter was published as a book in its own right in 1699, titled Aceteria and it is from this book that this recipe comes:
An Herb-Tart is made thus: Boil fresh Cream or Milk, with a little grated Bread or Naples-Biscuit (which is better) to thicken it; a pretty Quantity of Chervile, Spinach, Beete (or what other Herb you please) being first par-boil'd and chop'd. Then add Macaron, or Almonds beaten to a Paste, a littlesweet Butter, the Yolk of five Eggs, three of the Whites rejected. To these some add Corinths plump'd in Milk, or boil'd therein, Sugar, Spice at Discretion, and stirring it all together over the Fire, bake it in the Tart-Pan. 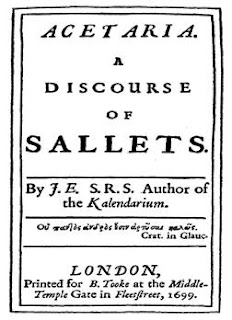 These sorts of sweet vegetable-based tarts were commonly eaten as a pudding during wintertime when there was no fresh fruit to be had. I had heard of carrots being used in this way, but not spinach! So, with an air of dubiousness I followed the updated version that Jane Grigson provides which surprisingly only contains spinach…
Begin by cooking 2 pounds of spinach in a pan with a little water and salt. Cover the giant pile with a lid and simmer until it collapses – about 5 minutes. 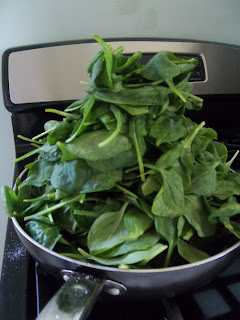 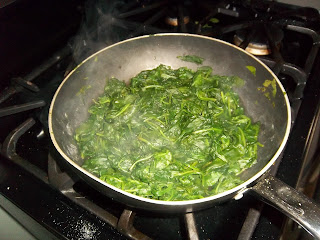 ...to this!
Let it cool before draining and squeezing out any liquid, and then chop it.
Mix an ounce of breadcrumbs with ½ pint of single cream in a pan and slowly bring it to the boil. Meanwhile soak 2 ounces of currants or raisins in some warm milk. Into the cream, stir the spinach along with 1 or 2 ounces of macaroon crumbs (for a recipe see here), 2 ounces of butter, 2 whole eggs and two egg yolks, 2 to 3 tablespoons of sugar and the raisins and milk. Stir the green slurry over a low heat until everything is well-incorporated. Add more sugar or macaroon crumbs and grate in some nutmeg to taste. 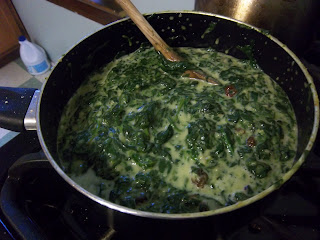 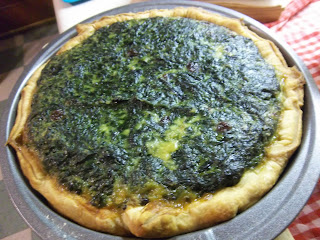 This should be eaten hot or warm with some cream for pudding.
#329 John Evelyn’s Tart of Herbs. Well this was certainly a strange one and I haven’t made up my mind as to whether I liked it or not. There was no attempt at masking the flavor of the spinach, but it did marry surprisingly well with the fruit and other sweet things as well as the nutmeg. Even though everyone ate it quite happily we weren’t sure if it was a dessert, and after my fourth slice, I still wasn’t sure! I think it could be very successfully reproduced as an amuse-bouche or hors d’oeuvre though. An interesting winter-warmer, though maybe not for a pudding course. 7/10. 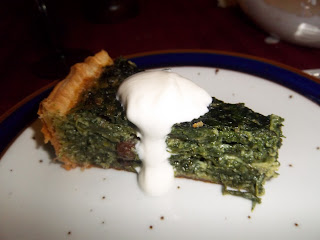 I love this-- thanks for leading me to it. It's interesting, the pairing of the spinach with the raisins seems very Italian, or like the Tourte de Blette of Provence... One of the great things about Jane Grigson is how she reminds us how wide British food can be in its outlook...
http://kitchencounterculture121.wordpress.com/2014/03/02/a-bed-of-chard-and-tourte-de-blettes/

I had no idea of this Italian link to this recipe, so thank you for the comment

I keep meaning to revisit this recipe and try other herbs in with the spinach. Sorrel seems like an obvious place to start....