My friends Ashley and Jason were throwing a bit of a party last weekend and it was a pot luck party, where everyone brings some food. We don’t have such things in England, but I shall try and introduce them as they are a great idea. I thought it would be a good opportunity to sneak in a couple of historical desserts from the eighteenth century, so I made the delicious sweetmeat cake and this cheesecake.


When one thinks of cheesecakes, one wouldn’t think of England – there’s plenty in mainland Europe and America of course – yet we have been making them for a quite a while, the Yorkshire curd tart being the most well-known. John Farley’s has some delicious, and very eighteenth century ingredients: sweet macaroons (the almond kind, not the coconut kind), fragrant yet earthy ground almonds and heady rose or orange-flower water. If you can’t find almond (‘French’) macaroons anywhere, here is a recipe. It is a little strange in that it should be served warm; all the cheesecakes I have ever eaten (baked or not) have always been served cold. 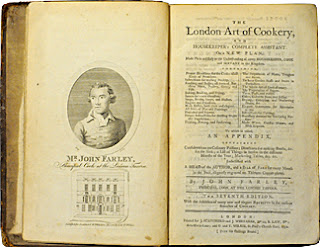 These sorts of puddings were very popular – there are no less than seven cheesecake recipes in Elizabeth Raffald’s 1769 book, The Experienced English Housekeeper.  John Farley’s book The London Art of Cookery was published in 1783 and included eight cheesecakes, with most of the recipes being copied word-for-word from Raffald’s book. The cheeky bleeder. I don’t think that he was trying to pass the recipes off as his own, he was just producing a compendium of recipes suitable for housewives and servants. He wrote it whilst he was head chef at The London Tavern. I think I will try some more of these cheesecake recipes.
To make the cheesecake, begin by lining a 9 inch flan tin with puff or shortcrust pastry. Griggers says that in the eighteenth century puff pastry would have been used, so I went with that so the cheesecake would be as authentic as possible. 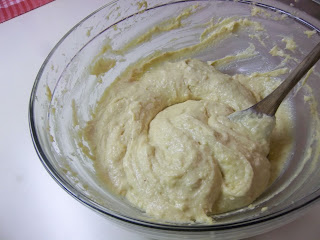 Turn the mixture into the line tart tin and bake at 180⁰C (350⁰F) for 30-40 minutes until the top is nicely browned. Eat the cheesecake hot or warm, with cream. 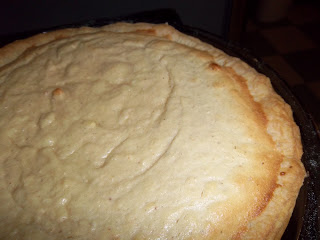 #326 John Farley’s Fine Cheesecake. It may look a little pale and pasty, but this really was a fine cheesecake indeed! The filling was not of a typical baked cheesecake because of all the almonds and macaroons in there. The cheese flavour was definitely present though as was a hint of perfume from the rose water. It all certainly suited modern tastes. Eating it warm seemed like a strange idea, but it was very good, especially with some cool cream poured over. We need to bring back the English cheesecake! 9/10
Posted by Neil Buttery at 2:51 AM

What a great idea it is of yours to make mini cheesecakes. I might steal your idea for my stall.You haven't patented it have you!?