If you are looking for a historical recipe that goes far far back, you would find it hard to do better than some nice marrow bones. In fact, this one goes so far back it predates humans themselves. We humans belong to the genus Homo – we are Homo sapiens – and there have been over a dozen now extinct Homo species discovered. Palaeontologists have found very good evidence that individuals of the genus Homo were making tools for extracting the nutritious bone marrow from the prey animals they hunted. To give a little perspective, Homo sapiens arose around 200 000 years ago, so this behaviour has been around for ten times as long as we, as a species, have been on this planet. Crazy shit, man.


It is hypothesised that the ability of these intelligent creatures to crack open the bones of animals, helped snowball the evolution of their intelligence, increasing the size of their brains and the complexity of their tools over evolutionary time. Eventually the invention of controlled fire came about during the early stone age. Here, early humans and Neanderthals learnt to roast bones as well as other things like seeds to make foods easier to digest and more palatable. Go back 7 700 years, and late stone age man was taking part in large-scale hunting, butchering, cooking and feasting – according to the findings at an archaeological site in Holland. What was the apparent favourite? Bone marrow of course! 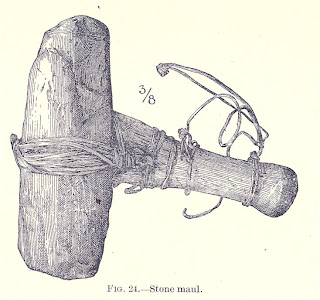 Stone mauls like this were used to crack open marrow bones.
Many have been found in Alaska, Canada and Australia
The bone marrow was prized because it contained a huge amount of energy in the form of fat, which allowed them to spend a larger portion of energy to brain production, fuelling the evolution of brain size itself. These days bone marrow is only fit for dogs it seems, and yet if you go back a century or two, bone marrow is a pretty common ingredient. Grigson points out that Queen Victoria herself dined on bone marrow on toast every single day. That said, these forgotten cuts are getting attention once more; the excellent nose-to-tail chef Fergus Henderson’s signature dish is roasted marrow bone. 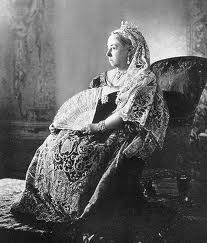 Queen Victora obviously put away a few too many marrow bones!
I managed to get some marrow bones from an excellent farmer in Missouri called Jeremy Parker who sells top-quality grass-fed beef (a big deal in America). His company is called Missouri Grass Fed Beef (here’s the link) and if you get the chance, get hold of some. I met him at the local farmers’ market and he very kindly cut me some bones right from the centre of the leg bones. It is sometimes possible to buy the marrow already extracted, but it usually costs a fortune.
If you want to have a go at cooking your own bone marrow, you will need one centre-cut piece of marrow bone per person between four and six inches long. 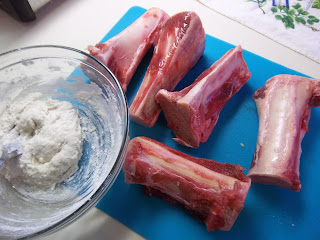 Make a thick paste of water and flour to cover the end of the bones and wrap the ends tightly in foil. The paste cooks and forms a barrier, preventing the marrow from leaking out. 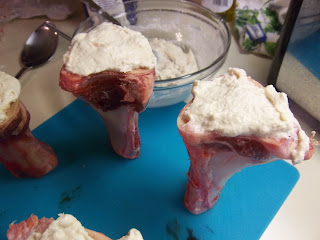 Next, tightly wrap the entire bone in more foil and stand them up in a suitable cooking vessel such as a deep stockpot or fish kettle. Add water to at least half way up the bones and bring to a boil before turning the heat down to a good simmer. Cook for two hours, and remove the foil, peeling off the dough-plugs from the ends. Serve stood upright on a plate with slices of dry toast to spread the marrow on. 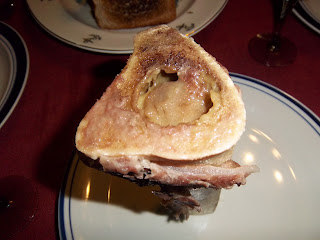 All you need is a little salt to sprinkle over. If you are the posh type you can buy some marrow spoons to eke out the marrow. We used teaspoons and lobster scoops instead, but skewers and knives would probably work too.
#319 Marrow-Bones. My goodness, these were so delicious. The marrow was extremely soft and well-flavoured. You could tell the marrow was massively high in fat – it seems to almost effervesce in the mouth. It was extremely satisfying to dig in with various implements to extract all the goodness. I now understand why this was the most sought-after part of the animal. I also now know that no dog of mine will be getting the marrow bone! 9/10.
Posted by Neil Buttery at 4:15 AM