I made this almond pudding because I found that I just happened to have all the ingredients for it, so I thought why not? I had bought a load of baking ingredients for the Thanksgiving desserts for which I was in charge, you see.
This is the second of two almond puddings (I did Baked Almond Pudding II a while back) that have absolutely no introduction from Griggers. It is strange that a recipe she obviously thought so good and so English that it had to have two recipes devoted to it should be basically unknown. However, a quick bit of research later, I found that these puddings were popular from the eighteenth century. The recipe closest to this one in English Food, appears in Mrs Rundell’s Domestic Cookery from 1859. 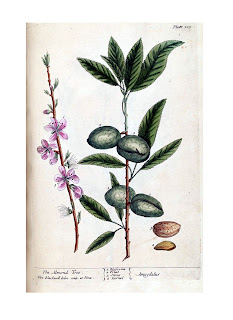 The almond tree drawn by Elizabeth Blackwell 1737
This recipe requires bitter almond essence – it is quite easy to find online these days – and it is quite important to add some. The essence really gives any almond-based dessert a hit of almond aroma that the subtly-flavoured domesticated almond cannot provide. The bitter flavour is provided by benzaldehyde and cyanide – in time past, any king eating anything that tasted of bitter almonds, would have had good reason to start panicking! The essence just contains the benzaldehyde, so don’t worry, you won’t cark-it from using it. It is very difficult to get hold of bitter almonds themselves, but a good substitute is the nut inside the kernel of an apricot.
To make Almond Pudding I, begin by mixing together 4 ounces of melted butter, 8 ounces of ground almonds, 5 bitter almonds or a few drops of bitter almond essence, 2 tablespoons of double cream, a tablespoon of brandy, 4 or 5 heaped tablespoons of sugar, 2 egg yolks and 2 whole eggs. The mixture can then be turned into a greased shallow pie dish. Grigger says – as does Mrs Rundell – that you can line the pie dish with some sweet shortcrust pastry to make it go further. I had some left-over pastry and seeing as this dessert was for the Thanksgiving meal, I took their advice. Bake the pudding for around 45 minutes at 190⁰C (375⁰F) until there is a nice golden crust on the pudding. 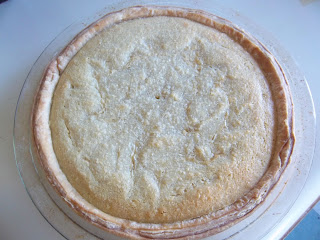 Serve with some more sugar, butter and brandy, she also says.
#318 Baked Almond Pudding I. Much more cakey than the previous almond pudding, and as nice. It seemed rather bland – there wasn’t enough sugar and it would have been improved greatly if the pastry hah had a thin layer of raspberry jam. That said, it did get more moist and flavourful as it got older. An okay pudding that could be made very good with some minor alterations. 5/10.
Posted by Neil Buttery at 10:16 PM