At the end of the summer, I bought a whole crate of cherries for just a few pounds toward the end of the season. Dutifully I stoned them all and froze them and then promptly forgot I ever had them. That was until I looked in the freezer and discovered them again, and since I am trying to use up everything in there, I thought I would make good use of them as a dessert.

Cherry season is pretty much a non-event in Britain these days, unless you live in cherry country – Kent. Almost all the cherries sold in markets and supermarkets are imported and finding home-grown cherries is nigh-on impossible. I certainly could find any here in Manchester.

Cherries have been enjoyed since the times of Ancient Greece, where they were considered only really worth eating raw, where they served as diuretic. In fact there is a detox diet that requires the poor dieter to put away a kilo of cherries a day; I like cherries, but not that much. Cherries did not become popular during – and therefore were only cultivated from – the Middle Ages. It was then that the cherry harvest became a part of European festival and a symbol of all that is good in summertime. Luckily in the day of the domestic deep freeze, we can save our cherries and enjoy them whenever we like, though they best eaten or cooked fresh really.

Anyways, that’s enough schpiel! Try these dainty little cherry tarts – they are essentially mini-clafoutis with a pastry base. 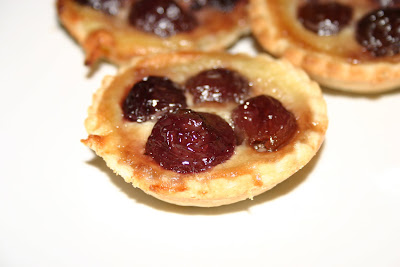 Start by making some sweet shortcrust pastry by rubbing three ounces of flour into five ounces of plain flour and two tablespoons of icing sugar. Bring the dough together with a large egg yolk and a tablespoon of lemon juice. If it is still a little dry, then add some cold water or milk. Allow to rest for at least 30 minutes in the fridge. Meanwhile, stone around a pound and a half cherries. Roll out the pastry thinly – as sweet pastry is very soft, it is worth rolling it out on some cling film of greaseproof paper – cut out 18 circles to line some small tart tins. Place a closely-packed layer of cherries in each little tart and then make the sweetened custard filling: whisk together a quarter of a pint of double cream, two eggs and three ounces of caster sugar. Pour a scant tablespoon of each of the cherry tarts and then bake for 15-20 minutes at 230⁰C until the custard browns and is set. Eat hot or warm.

#221 Cherry Tarts. A good and simple dessert to make, though the frozen cherries were perhaps not as good as fresh ones. Maybe the best to use would be morellos. Mine were a little insipid. That said you can’t go far wrong with the sweet pastry and custard elements to this pud. I’m sure you could use any fruit. I bet some lightly-stewed rhubarb pieces would be delicious. 5.5/10, though with good cherries, it would have been at least an 8/10, I reckon.

I reckon about 6.5/10. They were pretty good but nothing spectacular and I'm not really a pudding man anyways.