It’s been a while since I’ve done a bread recipe, and I’m definitely out of practise. I chose this one because it seemed suitably wintery, plus it used up flour that has been sat in the cupboard for a while now and I am trying to clear them, as I’ve mentioned previously. (As an aside, does anyone have a recipe that uses rice flour? It’s been sat there since that rubbish rice cake.) The main ingredient is granary flour, though I’m sure you could use wholewheat instead; I used a little stoneground flour left over from the Northumbrian Wholemeal Scones and Doris Grant’s Loaf from yonks ago. Grigson calls granary flour ‘Granary’ flour, because it’s a proprietary blend of malted flour and other nice things from one particular miller, though she doesn’t say who.

Don’t be put off by bread-making, Grigsoners, I really like doing it, and did start to get good at it, and even if it is a bit on the heavy-side, it will taste so much better than bought stuff. I think that it is the yeast flavour. Supermarket bakeries cannot compete – even with your worst effort!
Sift together a pound of ‘Granary’ flour, 4 ounces of strong white bread flour and 2 teaspoons of fine sea salt in the bowl of a food mixer. Add a packet of dried fast-action yeast (I reckon that’s about 2 level teaspoons) and mix well. Using the dough hook, stir in around ½ pint of warm water so that a soft, rough dough forms around the hook. Add two tablespoons of walnut oil and briefly knead, add more flour to make it smooth before placing in an oiled bowl. Cover with clingfilm and allow to ferment in a warm place until it has doubled in bulk. The time could be anywhere between an hour and several hours, depending on where you do this. As I don’t have an airing cupboard, I pop the bowl over the radiator. Knock back the dough (i.e. punch the air out of it) and knead in 4 ounces of roughly chopped walnuts. Now either place in an oiled loaf tin (or tins) or make it into a shape. I decided on a nice big round rustic loaf (i.e. the easiest). Use a very sharp knife and make some slashes on the top of the loaf and, bake in a very hot oven – 230⁰C – until cooked; this will depend upon the shape and size of your loaf, mine took 25 minutes. The way to tell is to tap the bottom – if it sounds hollow, it is done. Cool on a wire rack and eat with cheese, a winter stew or warm with butter and honey, I reckon. 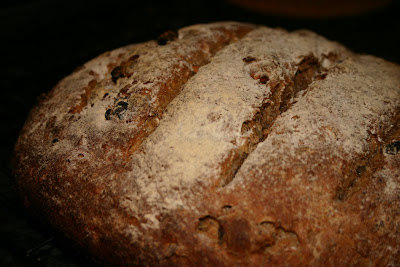 #217 Granary Bread with Walnuts. Definitely the best bread so far – dense and with a good crumb, but not heavy. The flavour of the walnuts and the oil come through well, but are relatively neutral so that it would go equally well with sweet or savoury food. It’s very easy to make, all you need is some patience. Great stuff – a really nice, country loaf that is a little different, yet very classically English. 7.5/10.
Posted by Neil Buttery at 9:34 PM

2010 in Grigsonland is off to a cracking start with three winners in a row. This bread was delicious. Not heavy at all, but still a good mouthful and lovely with cheese and chutney. The flavour of the walnut really comes out and yet is not overly bitter (as I sometimes think the nuts can be) the oil and baking of the chopped nuts seeming to make them more delicate. One I shall definitely be requesting again or perhaps even attempting (I'm a bread-making virgin).
8/10
Char

Hi, in answer to your query re.using up rice flour try looking for recipes for Dutch Crunch loaf, not made it yet myself - need to get some rice flour in! - but it is apparently supposed to be a good match for Asda's Tiger bread which is what I was hoping to be able to recreate myself. Good luck, let us know if you make it.
Samantha B.

Hi Samantha - thanks for commenting. I shall defintely root out a recipe for that - Cheers!!