I had people coming over for a nice Thai meal and initially thought I’d make some light fresh Thai-style dessert to go with it. Then I though, ‘Bugger that’ and went for the stodge option. I’d heard of Queen of Puddings and seen folk on telly making it, but had never eaten it before. Obviously something called Queen of Puddings must be a delicious taste sensation, mustn’t it? For those that don’t know, QoP is a dessert made of a sweet lemony custard base thickened with breadcrumbs and egg yolks, a layer of jelly, and then topped with meringue. According to Wikipedia, it goes back to the Seventeenth Century.

Begin by making the custard base:

Place 5 ounces of fresh brown or white breadcrumbs in a bowl and stir through a tablespoon of vanilla sugar and the grated zest of one large lemon. In a pan heat a pint of milk and 2 ounces of butter until almost boiling. Pour it over the breadcrumbs, stir it, and leave to stand for 10 minutes and beat in 4 large egg yolks (reserve the whites for the meringue). Grease a shallow dish with a 2 ½-ish pint capacity with butter and pour in the custard mixture. Bake at 180ºC for up to 30 minutes, though it could be much less; dependent upon the dimensions of your dish. Take out the dish when the custard is still slightly wobbly.

Warm up 2 tablespoons of fruit jelly: raspberry, blackcurrant or bramble and spread it evenly over the custard. You could use jam here too, but sieve out any seedy bits. Whisk the egg whites until stiff and then slowly fold in 4 ounces of caster sugar. Spread the meringue over the top and sprinkle a teaspoon or two of sugar over the top. Return to the oven until browned. Serve warm with cream or custard if you like (I served it au naturale). 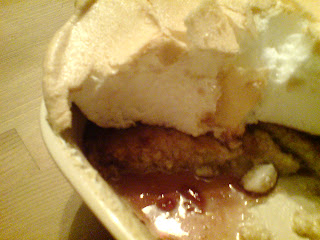 #112 Queen of Puddings – 6/10. A nice desert; I think I had thirds by the end of the night – was a little tipsy by the end (sorry about the quality of the pic!). It was the crispy meringue that definitely saved it from being blow average. Though good, slightly disappointed that it wasn’t some kind of phenomenal pud.
Posted by Neil Buttery at 8:19 PM

This is a great British pudding- one of my favourites. Something must of gone wrong and as you are quite the chef it must have been the booze. Hope you tried some cold the next day. Double yum!

6.5/10. perhaps it should be called the prince/princess of puddings but still a very tasty dessert, the meringue was a complete success (well done buttmunch) and did make this what it was, crispy light and perfectly golden. I enjoyed the gloopy consistency of the innards but perhaps not fit for a queen, she would make a terrible mess of herself slopping all this into her bejeweled gob.