The quinces I bought the other day were beginning to look a bit sad and I needed to use them up with something. I really like quince, so quince jelly was the obvious choice – making a few jars of this would mean I would still be eating them way beyond their season had ended.

By the way, this recipe can be followed as is but with medlars, sorbs or crab apples, so if you are lucky enough to know where their might be some growing near you try this jelly.


Begin by scrubbing clean your quinces and chop them roughly along with the same weight in Bramley apples. Do not peel or core them – that is where the pectin resides that will set the jelly. Place the fruit in a pan and barely cover them with water. Simmer the fruit until they have become a pulp (I used a potato masher to help the quinces along). 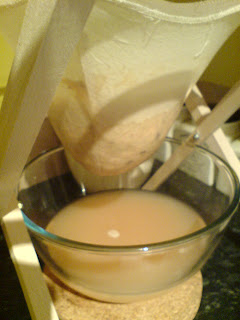 Place the pulp in a jelly bag suspended over a bowl – if you don’t have one, use a muslin-lined sieve instead. Leave the pulp to drip dry – this takes a while, a few hours at least, overnight if you’ve done loads. Measure the volume of liquid and pour into a heavy-based pan and add a pound of sugar for every pint of liquid. Boil this mixture until this has reached setting point (read the recipe for marmalade for more info on this) and pour into sterilised jars.

Quince jelly can be used like any fruit jelly, but is typically an accompaniment to cheeses, game and turkey. 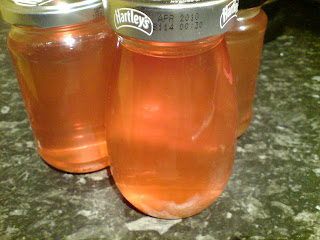 #114 Quince Jelly - 6.5/10. A nice conserve, but I perhaps more apple than I should have, as the quince flavour is not super strong and is sweeter than I’m used to. That said, I used as jam and I think it’ll be a lot better with some game or cheese. Also, the recipe’s very good as I got four jars of jelly from just two quince!
Posted by Neil Buttery at 6:58 PM

so impressed. it's a beautiful color and if too sweet to eat on those gorgeous muffins, you could use it as a glaze for fruit tarts -- pork -- duck -- barbeque etc..