I want to clock up some Grigson recipes so that the 100th is something exciting before Christmas with a hare, otherwise it’ll be something boring like Welsh rarebit or something. The first of these is mayonnaise. Surprised it’s in there, really; I know we all use it, but it’s not English. Who am I to judge? Apparently, in 1861 Mrs Beeton, took it as read that mayonnaise was well established here. Funnily enough, I’ve never actually made my own mayonnaise and only ever bought it from the supermarket and wasn’t sure what to expect. If you haven’t, have a go – it’s dead easy. I don’t know what the fuss is about getting the yolks and oil to emulsify and not split; just don’t rush it, and you’ll be fine…

Beat 3 egg yolks with a whisk along with a teaspoon of Dijon mustard (English is way too strong for this) and a dash of lemon juice or white wine vinegar. When they start to thicken slowly add ½ pint of groundnut or olive oil (I actually used both at a ratio of about 4:1). Add the oil drop by drop as you whisk at first. If you’re wrist begins to ache take a little rest. You can be braver with the oil as you get to the half way mark. When all is added, season with salt and pepper and extra lemon or vinegar if needed. Easy! 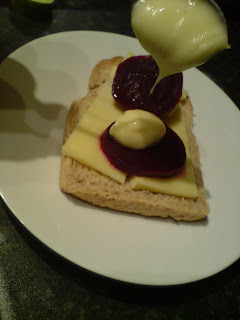 FYI: No-one is really sure of the origin of the name – there are two theories; first, says Larousse Gastronomique, is that it is a popular corruption of moyeunaise, derived from the very old French word moyeu, which means yolk of egg. Or it came from mayennaise after Charles de Lorraine, duke of Mayenne, famous for taking the time to eat his chicken with cold sauce before being defeated in the Battle of Arques. What a trouper. I prefer the second story.

#93 Mayonnaise – 6/10. Not disappointed as such, but unprepared, I think the right word might be. Home-made mayonnaise is absolutely nothing like shop-bought. They are incomparable. This mayonnaise was rich and slightly bitter in flavour and not good when I dipped my finger in to check for seasoning. However, when I tried it out on my favourite sandwich – mature Cheddar, picked beetroot and mayonnaise, I changed my mind and thought it was very good. I just think I’m too used to the bland old Hellman’s to be a convert…Is that wrong?
Posted by Neil Buttery at 1:09 PM

Actually, I'm upgrading it to a 7.5/10 after trying it again a couple of days later - the flavour is much improved and makes excellent egg mayonnaise sarnies

The mayo thickens after a few days in the fridge, so do make it runnier when whisking up a batch to keep.

Also, olive oil has that relatively more bitter taste, so I will use grapeseed oil next time.

Other adjustments were the use of wholegrain mustard (what I had in fridge) and calamansi lime juice (have a tree at home). The calamansi made it taste fruitier and sweeter. I also added some sugar (less than 1tbsp) to balance out the bitterness coming from olive oil.

I agree about the olive oil - these days I only use a little, the bulk being something flavourless; and not the extra virgin either. Sometimes I miss it out entirely and use a different flavoured oil like hazelnut or walnut and some lemon juice.