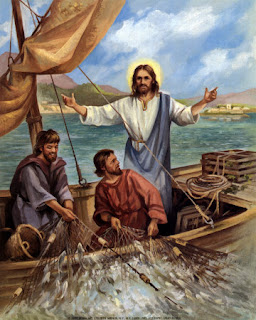 "And lo, Jesus said,
'Hurry up lads, I am champing at the bit here.'"
There have been plenty of recipes in English Food that have seemed so unappealing on paper, but have turned out good. This one certainly didn’t sound good – a fish stew made from freshwater fish, a few basic vegetables and water. I think it’s the name that did it for me I think – I imagined a thin, watery, muddy-tasting soup. However, every recipe must be cooked and freshwater fish is a bit of a speciality in America, seeing as most of it is far away from the oceans. It would have been a tricky one to do in England without spending a fortune getting a variety of freshwater fish from the fishmonger, or going out and fishing for the buggers yourself. Here, you can just go to the supermarket and choose from a range.

So, water-souchy is a very rustic fish stew made from whatever the angler in the family brought home after a session in his or her waders in an idyllic stream in rural England. Obviously, I am not in England anymore, so I wanted the fish to reflect what I might have caught here on the Mississippi River if I could be arsed to fish there. I had a look in Seafood City, an Asian supermarket on Olive Boulevard in St Louis and bought myself some good fresh carp and catfish. Five pounds of fish are required, and cost me the princely sum of $7.50. Pretty good, I reckon, seeing as I’m rather poor at the moment.

Water-souchy became popular in the seventeenth century and remains so, at least in fishing circles. The word comes from the Dutch waterzootje, and has been described as the bouillabaisse of the Northern Latitudes. According to certain George Augustus Sala, writing in 1895 in Thorough Good Cook, 'You rarely get it good, save at Greenwich. Why I cannot say'. Well, it may be to do with the freshness of the fish, says Griggers, the quality of your water-souchy will be diminished if your fish is not perfectly fresh.

To make this simple stew, start off with five pounds of very fresh scaled and cleaned freshwater fish and cut them up into big chunks – no need to bone or fillet, for it is the bones that produce the stock and flavour the dish. Jane suggests perch or a mixture of fish such as perch, carp, eel &c. In a large saucepan, spread three ounces of butter over the base and cover that with the vegetables and herbs: two cleaned and chopped leeks, two chopped celery sticks, two tablespoons of chopped parsley and a bouquet garni. My bouquet garni was made up of a bay leaf, some parsley stalks, three fronds of dill and a crushed garlic clove all tied up in a bunch. 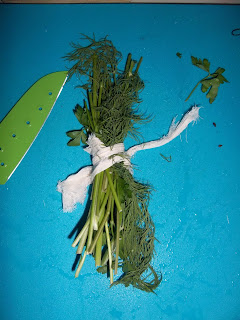 Season these well with salt and pepper and then place the chunks of fish on top. Season those too. Cover with water, bring to the boil and simmer with the lid on for about twenty minutes until the fish is cooked. 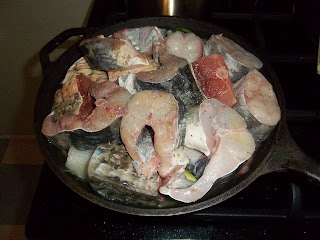 Serve in bowls, sprinkled with some croutons of bread fried in butter. I used stale sourdough bread for this, and they were very good, even if I do say so myself. ‘One eats water souchy with spoon and fork’, according to Mr Robert Pierpoint, writing in 1908. It’s the only way you can eat it really. 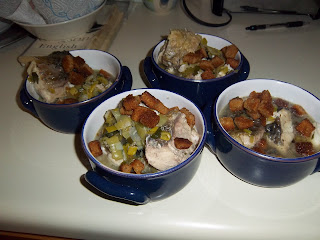 #304 Water-Souchy. Well as per usual the bad sounding recipe turns out to not be a dud at all. The stew was well-flavoured with the vegetables, herbs and the fish itself. It is really important to choose a pungent and tart herb like dill for something very simple like this I think as it livens things up no end. The fish was very moist, but the thing we all found a little off-putting was the bones. We are too used to eating neat steaks and filleted pieces of fish, I think; so the best way to improve this recipe, we decided, would be to fillet the fish and use the bones, and herbs to make a stock first, drain it, and then cook the vegetables and fish in the clear broth. Indeed, Eliza Acton suggests the same method in Modern cookery, in all its branches (1845). A good stew scoring 6/10 from me, but I think it could easily upped with some minor changes.
Posted by Neil Buttery at 3:20 AM