When we all thought about going out for the day picnicking, the first thing I thought of making was a Cornish pasty; easy to make and easy to eat. The whole idea is that they are hardy. I'd never made one before, but knew that it was pretty straight forward...

Start off by making the pastry. Cornish pasty pastry should be made with lard as the only fat, apparently. Grigson doesn't give much instruction on how to make pastry other than, fat and flour are to be used in a ratio of 1:2. To make two large pasties I used a pound of flour and 8 ounces of chilled, cubed lard. It sounds a lot, but these are big pasties! Start off by rubbing the flour into the fat, along with a pinch of salt. Use the tips of your fingers, or the appropriate attachment on your food mixer. I usually go for the mixer as it doesn't make the fat warm up like fingertips do. Don't be tempted to put the mixer on a high speed; use the lowest setting possible (see review, below). Let the pastry rest in the fridge for at least half an hour.

Meanwhile, chop up a pound of beef - use skirt, chuck, or as I did, top rib. Make sure all the fat and gristle is cut off. Chop a four-ounce onion, and thinly slice 3 ounces of turnip and 8 ounces of potato. Mix the vegetables and meat in a large bowl and season well with salt and pepper - do not skimp - plus a pinch of fresh or dried thyme.

Divide the pastry into two and roll one half to the size of a large dinner plate, pile in half the mixture in a line down the centre of the pastry circle, pull up the sides and crimp them together using water as glue. Place it on a baking tray and brush with egg. Repeat with the other half. Bake for 20 minutes at 200ºC, then turn down the oven to 180ºC for a further 40 minutes. 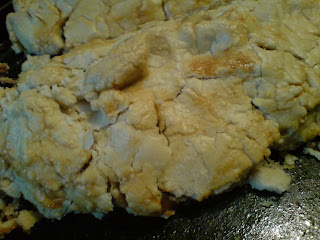 #70 Cornish Pasty - 2/10. The first disaster of the project! I've given the recipe because I know what I did wrong - because I was making such a large amount of pastry, I tried to hurry it along by turning the speed of my mixer too high. The result of this is the fat doesn't form 'breadcrumbs', it softens too early and doesn't get incorporated properly. If you are making it, heed my advice! It would perhaps make two lots of pastry, using half the required amounts of fat and flour. The filling was delicious , but the pastry turned into dust, I couldn't even get them of the baking tray without them collapsing. Instead I ate the filling with a spoon, and threw the rest in the bin. I am going to try them again next week.
Posted by Neil Buttery at 1:00 PM