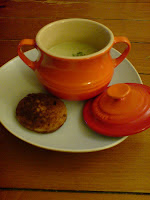 After spotting the broad beans in Unicorn, I made (#38) Broad Bean Soup. A simple affair: soften an onion in butter, add water, a little chopped parsley, the beans, salt, pepper, and a little sugar and simmer until cooked. Then liquidise in a blender and add a few tablespoons of cream. Serve with a crouton!

This was a lovely fresh tasting soup - it's certainly letting me know that Spring has arrived; even though the weather outside is AWFUL! I normally make soups with stock and thought that it would be quite bland. The best thing about it, however was the fact I could serve the soup up in the new le Creuset mini soup terrines that I bought...

FYI: the broad bean, or fava bean, is native to Africa and Northwest Asia, but has been cultivated in Europe since around the Sixth Century BC. Also, raw broad beans contain vicine, which can induce haemolytic anaemia in patients with glucose-6-phosphate dehydrogenase phosphate deficiency. So do say I didn't warn you!

#38 Broad Bean Soup: 6.5/10. A lovely fresh soup, but I prefer more substantial soups, however it would be great as a first course.
Posted by Neil Buttery at 11:54 AM