I planned to do alot more than I actually did for the Christmas dinner. It did all go down a treat though. However, only two Grigsons were done. Most of the recipes for the meal were taken from the brilliant Leiths Vegetarian Bible that I bought Greg a couple of years back; I would recommend everyone to buy it whether a vegetarian or not. This was the menu: 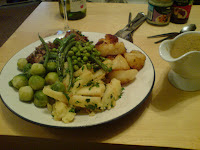 'Parsnips need butter' says the Grigson. And so right she is. Buttered parsnips is a way to make roast parsnips without roasting them it seems. Boil your parsnips until nearly cooked, drain, and then saute them slowly in butter. They go all nice and golden and chewy. Yumbo! Add some parsley and salt and pepper and you're done. 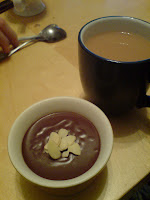 The Pots of Chocolate with Rosemary were a strange affair; dissolve 8 ounces of sugar in 8 fluid ounces of dry white wine and lemon juice, add a pint of cream and simmer until it thickens. Now add either a stem of fresh or a teaspoon of dried rosemary (I used dried as they'd run out of fresh at the shop) and 5 1/2 ounces of grated dark chocolate. Simmer for 20 minutes until nice and thick. Pass through a sieve and pour into ramekins to set. All pretty easy. sprinkle with some slivered almonds. The Grigson did warn that it was a very rich dessert, and she was not wrong! Greg and I managed to eat half of one each!

#21: Buttered Parsnips.7.5/10 - A great way to eat parsnips, but are they better the roast!? I don't think so!
#22: Little Pots of Chocolate with Rosemary Cream. 4.5/10. The combination of rosemary-infused chocolate works very well indeed. But the vast amounts of wine and sugar made far too rich even for me!
Posted by Neil Buttery at 1:41 PM

I've mande the chocolate mousse dessert twice. They were so sweet that I added cayenne pepper, which was a great addition, and served them in half-filled expresso cups - more than enough sweetness for one person.
The first time they came out perfectly but the second time, they didn't set in the middle. Could it have been because I used lactose free milk I wonder? They were indeed terribly sweet so next time I will try cutting down on the sugar. Still, my dinner guests enjoyed - or said they did - the very sweet morsel at the end of a long dinner.

I make this but I do it as a much lighter mousse and alot less sugar! A touch of chilli is a great idea

Yes i do it as a mousse too. Chili would be great!