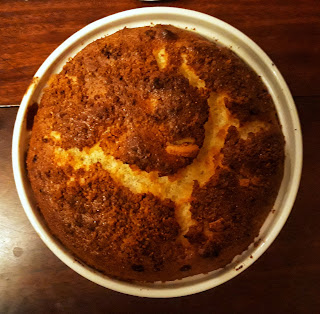 I like to eat as seasonally and as locally as possible, especially when it comes to fresh fruit. However, this is impossible in the middle of winter when all there is to eat are the ubiquitous apples and pears, so I cast my net a little further this time of year.

However, it is easy to forget what a delicious and versatile fruit the pear can be; especially when aromatic and very ripe, its optimum state according to the late, great broadcaster Terry Wogan who said it had to be so ripe and messy that the only way to eat one was hovering over the sink completely naked.
A ripe pear is a gastronomic delight. And one rarely experienced by those who buy their fruit in packets at the supermarket, following the ‘best before’ dates to the letter. If you have a large, ripe pear, leave it in the fruit bowl as long as you dare, you won’t be disappointed. If you need to feed several people, use it to make a soufflé like this one.
The peariness can be enhanced – should you like – with some pear brandy. This can come in the form of a calvados that uses perry (pear cider) in its manufacture, or the liqueur Poire William. These can be tricky to get hold of, so you could go with the cherry liqueur, Kirsch.
By the way, this is the last of two sweet soufflés from the book (the other being #293 Mrs Beeton’s Chocolate Soufflé), and the last of the entire book (there are several soufflé recipes in the book). Not only that, it the last of the recipes in the behemoth that is the Puddings chapter of the book!
First of all, preheat your oven to 200°C, and prepare your soufflé dish: Take two macarons and crush them. A good macaron should be squidgy in the middle, so I found this task much easier by freezing them and blitzing them in my food processor. Next, butter the dish well – you’ll need one around 2 ½ pints (1.5 litres) capacity for this recipe. Sprinkle the macaron dust all around the inside of the buttered dish, saving the remaining crumbs for later (see below). 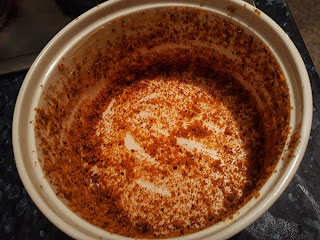 Take a large, ripe pear and peel, core and quarter it. Take a fork and give it a mashing, or if feeling lazy, use a food processor or hand blender. My pear was so ripe that it started to brown almost immediately, stymie this by quickly adding the juice of half a lemon along with a tablespoon of the pear brandy (or Poire William, or Kirsch).
Place 4 ounces of butter in a mixing bowl and let it melt slowly over a pan of just simmering water. As you wait, measure out 4 ounces of vanilla sugar (posts #36 Vanilla Sugar and #266 Concentrated Vanilla Sugar show you how) and 1 ounce of cornflour. When the butter has melted, sift these into it and beat in well with a whisk.
Separate four eggs, take the bowl off the heat and beat the yolks in one-by-one, then add the pear mixture. Whisk the whites to the stiff peak stage (when you can turn the bowl upside down and the whites stay firmly put). Add a large tablespoon of the whites to the mixture and mix in well, don’t worry about losing any air at this stage, adding a little egg white now means that the rest will be ‘accepted’ by the mixture more readily. 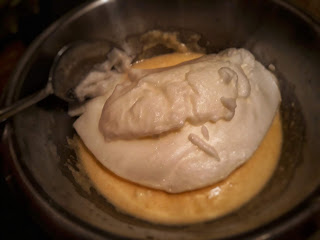 Tip in the rest of the egg white, fold it into the pear mixture with a metal spoon. I found that the mixture was too runny to mix the whole lot together well – I presume I didn’t let the cornflour thicken enough. Pour the mixture into the soufflé dish, sprinkle with the remaining macron crumbs and put in the oven. 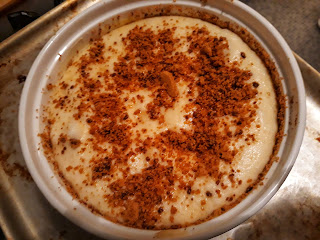 After 3 minutes, turn down the heat to 190°C and cook for another 27 minutes (i.e. half an hour in all).
Serve immediately! 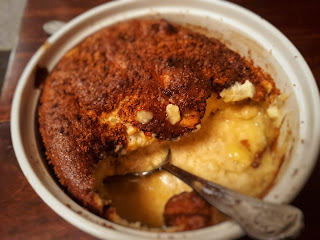 #436 Worcestershire Pear Soufflé. I’m not sure what to make of this recipe – it tasted delicious, the overripe pear, alcohol and hint of vanilla made for quite a heady aromatic hit, but the texture was a little wrong; the mixture essentially sank to the bottom, not getting incorporated properly, and remained very liquid. I know that a good soufflé should be light at the top and saucy in the centre, but here the contrast was a bit too much. I think that Jane’s instructions were not clear enough regarding the base mixture – perhaps the butter-sugar-cornflour mixture should have been cooked until very thick before adding the rest of the ingredients. I think that this is worth trying again to get right as it should have been an excellent pud. In conclusion, flavour excellent, but recipe perhaps too vague: 7/10
Posted by Neil Buttery at 10:32 AM