Cooking recipes from English Food by Jane Grigson, has essentially got me where I am today – she’s taught me to cook a wide variety of foods and she has passed on to me a huge interest in British cooking and its forgotten food, and its food that has now a bad name.


Now I have – along with Mr Brian Shields – opened my little restaurant called The Buttery, I am constantly using Jane’s recipes for inspiration for our menus. We have recently started a brunch menu and I spotted this recipe from Chapter 2: Cheese & Egg Dishes. It actually comes from Hannah Glasse, who wrote many a great recipe, and is – unsurprisingly – one of Jane’s most common sources in Engish Food (click here for all the Hannah Glasse recipes cooked in the book thus far). I was looking for something similar to Eggs Benedict, but with British roots. I hoped this recipe would be it. 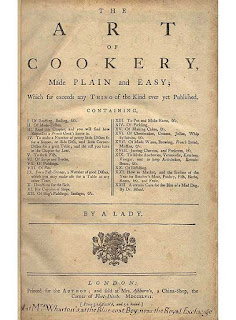 Jane has made a few adjustments to the original recipe; a dish of boiled eggs in a creamy sauce, her keen sense of Georgian ingredients helps us achieve a final plate of food that is as historically accurate as possible. The devil is in the detail. We also see some her characteristically evocative writing:


In the days before pasteurisation, cream rapidly developed a sharp tang, which is why I used a mixture of double and soured cream…The lovely richness of the sauce suggests an idyllic countryside, cows in a pasture with summer flowers, and a steady sound of bees. An interesting thing is that one still finds it in Normandy and the Sarthe, served with trout and other fine fish, or with boiled chickens and rice.


Not all of the Hannah Glasse recipes have been well received, one – #230 English Rabbit – has achieved the only zero score in the book! However, others have gone down a storm (#366 A Fine Way to Pot a Tongue, springs to mind). 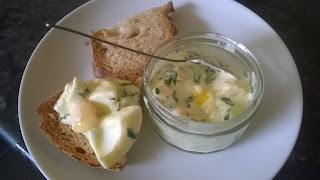 This fricassee of eggs serves eight as a first course, but can easily be scaled up or down.

Take eight large eggs and boil them for eight minutes in boiling water. Remove with a slotted spoon and run under the cold tap so that they can be peeled without burning your dainty pinkies. Cut them into quarters and arrange them nicely in eight small ramekins.


As the eggs are boiling chop up eight sprigs of parsley and melt six ounces of slightly salted butter – Jane gets specific here – in an eight inch frying pan. As it begins to foam, add a quarter pint each of double cream and soured cream. Mix well with a wooden spoon for a couple of minutes and allow the mixture to bubble and evaporate. A thick sauce will form. Quickly stir in the parsley and pour over the eggs. Have ready some triangles of toast and serve and ‘eat immediately’.


#420 A Fricassee of Eggs. Considering the vast amount of butter and cream in this dish, it tasted quite light, the sour cream cutting through the richness. The sauce was a tricky thing as it kept splitting whenever I stopped stirring. I think a half-teaspoon of cornflour could have been used to make it more stable. I think that it could have been improved with the addition of some cooked mushrooms nestled in amongst the eggs before the sauce was poured over them. If the sauce wasn’t so difficult to work with, it might have been a benefit to grill them and get some nice colour on the top as one might do with a hollandaise. I think I prefer eggs au cocotte as a lighter starter for a meal (in fact that is what I ended up putting on my brunch menu). 6/10
Posted by Neil Buttery at 10:28 PM