I have had the foraging bug of late so I thought I would try and make these fritters that appear to been lost to history. According to Jane Grigson, the 18th century writer Hannah Glasse gave a recipe for these fritters that use the plant comfrey. Oddly, I couldn’t find the original recipe anywhere – I found clary fritters and a recipe using comfrey roots – hey ho. 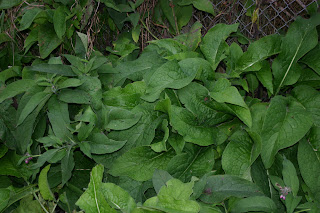 Comfrey is a relatively common plant found in ditches or beside hedgerows and river banks all over Europe. There are several species, but the most common in Britain is common comfrey with the Latin name Symphytum officinale, in case you want to find it in a field guide. They are quite easy to spot though: they have large broad leaves that taper to a point and the plant forms a bushy conical shape as it grows higher with younger, smaller leaves. The flowers are either white or purple, are small and arranged in little lines of about seven spikey blooms (though I didn’t count). The leave themselves are covered in slightly rough hairs that are very slightly irritating if the leaves are large.


One thing to point out, and I only found this out after eating them, is that comfrey leaves are a little poisonous and shouldn’t be eaten in large amounts, nor should they be eaten if you have liver problems. You have been warned. 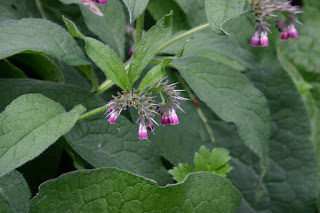 Collect some large comfrey leaves that still have a fresh green colour; the large warty dark green ones don’t look very wholesome to me. Take them home, wash and drain them then remove their stalks. Depending what you are serving with them, you will need one or two leaves per person, more if you are using the smaller tender leaves.


Meanwhile make the batter by mixing together 5 ounces of flour and a pinch of salt in a bowl. Whisk in a tablespoon of oil or melted butter and up to ½ pint of warm water to form a batter the consistency of double cream. The warm water will help thicken the batter a little. Lastly, whisk an egg white until stiff and fold into the batter.


Heat up some oil in a pan ready to deep fry the leaves. You know you’re at the correct temperature when a small cube of bread browns in about 45 seconds. Dip the leaves in the batter and fry on both sides until the batter is crisp and golden brown, around 4 minutes in all. Don’t be tempted to overcrowd the pan – the leaves will stick together and the whole thing will take much longer to cook. Drain on kitchen paper and season.
I took a photo but can't seem to find it now. Whoops!
#357 Comfrey Leaf Fritters. I really liked these, though probably for the wrong reasons; the thin comfrey leaves were beautifully tender but essentially completely tasteless! The batter however was absolutely delicious – brown and crisp and bubbly and quite possibly the best batter recipe I have ever used. I’m going to give it 5.5/10 though because the star of the show should have been the comfrey, but it was just simply a vehicle for the divine batter.
Posted by Neil Buttery at 12:33 PM