After returning from my little trip back to England and Ireland, I wanted to cook something that evoked some memories of it whilst all was still fresh in my mind. There are no Irish recipes in English Food, but there are a couple of Manx recipes (if you are from the Isle of Man, you are Manx). When Hugh and I flew the short distance from Belfast to Liverpool, we looked out the window and he told me about the bits of coastline and other features, and of course the Isle of Man was pointed out, looking surprisingly small. I've never managed to go to the Isle of Man, but it looked very pretty from the air.

This is apparently a traditional Manx cured meat dish, but I did a quick internet search and could find any references to it at all, so I can't give you any background information I'm afraid, Grigsoners. The cure is very simple to do; you simply have to pack coarse sea salt inside and outside of a duck 24-hours before you want to cook it. I assume in the days when this was done for actual preservation of meat, rather than for flavour, the duck could have been cured for several days or weeks. When you are ready to cook it, brush off the salt, rinsing off any tricky to remove bits and place in a pot with enough water to barely cover it. 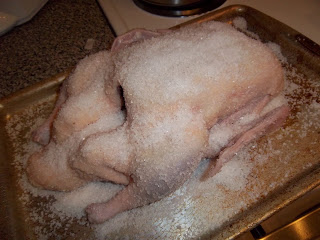 Cover, bring to a simmer and let it happily gurgle away for between an hour and ninety minutes, depending on the size. I am always worried about doing the boiled meat recipes in the book, I always think they are going to come out insipid and boring, especially in this case as there was no call for any stock vegetables or seasoning with spices. I invited my friends Danny and Eric around to sample the delights – hoping it would taste okay… 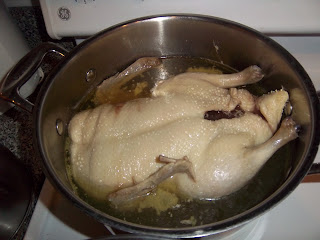 If you like, you can cure your duck in brine instead – check out the recipe and instructions on brining meat here.

While the duck is simmering away gently, you can be getting on with the accompaniments: an onion sauce and colcannon (an Irish invention of potatoes and either cabbage or kale mashed together).

For the onion sauce, chop four large onions and add them to a pan with just enough water to cover them, season, cover with a lid, and allow them to simmer for fifteen minutes. Drain them over a bowl, so that the cooking liquor is saved. Add half a pint of milk and just under a pint of the liquor to the pan along with half an ounce of butter and bring to a simmer. Measure two level tablespoons of cornflour and slake it with a little more cold milk and whisk it into the hot sauce; it will thicken instantly. Simmer for a few more minutes so that the cornflour can cook out. Add the onions back to the pan and season with plenty of salt and pepper – very important here to season it very well – plus the grated rind of a lemon. Add more liquor or milk if it becomes too thick. This sauce can be (and was!) made in advance – make sure you keep it covered with a lid or some cling film to prevent a skin from forming if you do.

For the colcannon, boil equal amounts of potato and kale or cabbage together in a pan. Drain, and mash with butter and salt and pepper. If you are feeling extravagant, add a little blob of cream.
When the duck is cooked, make sure you let it rest for about twenty minutes before you carve it. 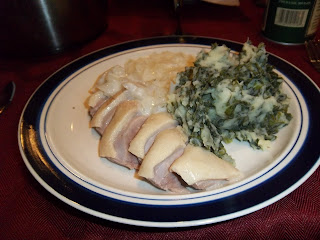 #292 Isle of Man Salt Duck. I must admit, when the duck was taken out of pan to rest, it did not look that appetizing with its podgy fat and no hint of colour. I'm used to eating roast duck. However, when I cut inside, there was the most tender duck meat within. It was salty, but not overpoweringly. It also had very subtle flavour too, as did the onion sauce, which I expected to be terribly strong. Instead, it was light and very good for a spring or summer meal. The colcannon was a great accompaniment too. This kind of good, but bland food, really requires heavy seasoning, otherwise it is in danger of becoming tasteless pap. This was not tasteless pap however: 7/10.
Posted by Neil Buttery at 12:40 AM

Have you tried dumplings and roast ducks? They are the famous and traditional Beijing dieshes. And also bird's nest soup? Its a delicacy in China.

I have tried many Asian duck dishes. I am against eating some - i won't eat bird's nest or shark fin soup. Think that in both cases it is far to cruel.
Also, eating a nest made of swift spit doesn't appeal!