Don’t let it ever be said that I don’t like a warm salad. Though I rarely make them, I don’t know why. Britain is not big on its salads really, though America definitely knows what it’s doing. This sort of food is perfect for this time of year – light and fresh, yet warming. Grigson doesn’t mention where this recipe comes from or how old it is and there’s nothing on the Internet regarding it in its historical sense.
This salad is pretty easy to do: quarter some parsnips, cut them into chunky spears and simmer in salted water for around five minutes until tender. Drain. Stir in some salad dressing (I did the one from English Food, though exchanged the sugar for honey). Add some shellfish (prawns or lobster) or some chunky meaty white fish like monkfish – I went for the prawns as I had them already. Arrange some lettuce on a plate and add the parsnips and shellfish. I used an iceberg lettuce, which has developed a stigma for being a bit crap, but I really like them; sweet and crisp (and cheap!). Scatter with chopped chives and parsley. 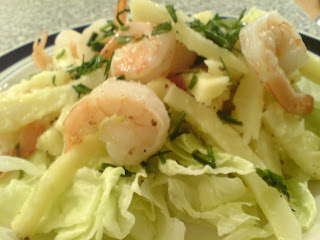 #261 Parsnip and Shellfish Salad. This was an excellent and easy to prepare salad. The warm parsnips acted like little sponges to the salad dressing and the sweet prawns complimented the earthy flavour of the parsnips. A very good 10 minute dinner. 8/10.
Posted by Neil Buttery at 11:44 PM

Looks good! I'll have to try making this. I love the sweet, almost nutty taste of parsnips, and people don't seem to eat them as much as taste would warrant. Carrots prevail in the long and skinny root department.