“People sometimes shudder at the mention of roly-poly puddings” says the Grigson; er, no dear, just the idea of THIS one! Why on Earth is there no jam roly-poly pudding, please!? I’ve been putting off the more weird ones – like this – but they are building up now. I wasn’t looking forward to it, but Griggers really does big this one up. It is cheap though, at least when mussels are in season.

I have only recently been able to pluck up the courage to eat mussels; I’ve always been a bit squeamish with bivalves for some reason. However, I do love mussels now. The Romans loved them too, and they’ve been cultured in France since the late thirteenth century, ever since a shipwrecked Irishman called Patrick Walton was washed up on a French beach and noticed some mussels growing on the fishermen’s nets. I doubt he wrapped them in suet pasty though.

To begin you need to cook your mussels – 48 in all, says Grigson. Scrub them and remove their beards and any parasites. Place them in a hot, wide shallow pan and cover. As soon as the mussels open, take them off the heat. Don’t use any mussels that have not opened. Shell them, reserving any juices, and let them cool. Pass the juices through some muslin into a small pan.

Now make the rest of the stuffing: In a bowl, mix together 3 ounces of finely chopped onion, 2 trimmed and finely chopped leeks, 2 chopped rashers of streaky bacon, 3 tablespoons of chopped parsley and a little salt plus plenty of ground black pepper.

Suet pastry is the easiest pastry to make. Sieve 10 ounces of self-raising flour in a large bowl and mix in a pinch of salt and 5 ounces of shredded suet. Using a knife or your hands, mix in some cold water until a firm and light dough is formed.

You are now ready to construct the rolypoly pudding. Roll the dough into a rectangle and sprinkle over the leek mixture leaving a centimetre border around three sides, and then evenly sprinkle over the mussels. Brush the edges with water and roll up the pastry starting at the borderless end, lastly press down the sides to prevent any leakage from the sides. Wrap it in a tightly-sealed but baggy foil parcel and steam for two hours on a rack in a self-basting roaster. If you don’t have one – use a normal roaster and make a foil lid as I did. When ready, place in an ovenproof serving dish and crisp it up in the oven for 10 to 15 minutes - careful now, it might collapse (see pic!). Whilst that is happening, make the butter sauce. Boil down the reserved mussel liquor, take it off the heat, and whisk in 4 ounces of chilled, cubed butter, bit by bit. Season well, add some chopped parsley, and it is ready. 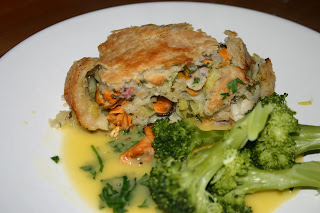 #189 Mussel and Leek Rolypoly 4.5/10. I though I liked this in the end, but then I wasn’t sure; it certainly wasn’t awful. I even had seconds. The mussels were soft and sweet, the leeks were cooked nicely and the pastry was crisp. The sauce was good too. I think it was too rich, and I ate too much. An unusual one, but I’m not sure I would recommend it.
Posted by Neil Buttery at 8:03 PM

This sounds great to me. Feel free to put any more unusual mussel recipes on hold till I'm back in the country. And don't try to tell me the heart brain and bone-marrow delights aren't piling up in the maybe next month pile. Surely during this thrifty period we should have seen a plethora of offal dishes reviewed.

I am trying to get some brains and things sorted actually. Plus I've got an interesting offal recipe to do for tonight...

This is one of my favourite dishes and I must have made it half a dozen times - unless you cocked up something (can't see anything obvious), I can't understand why you rate it so low - were it me rating it, I'd give it a good solid 9.

This is one i have been thinking about revisiting...I have made many puddings since and my tastes have changed somewhat. Now you are saying it's a 9, I'll certainly be doing it.
I've often thought that some chicken in there too would be a good addition...
Thanks for the comment!