Charlotte and I have been very excited about the prospect of making our own crumpets for a while – just how do you get all the hole in!? We were to find out. The recipe is actually one by Elizabeth David – a very influential food writer, who wrote a book on yeast cookery. It’s making recipes like this – really stoically English fayre that I would never have thought of cooking myself. They are very easy – you need to buy some rings to cook them in as the batter is reasonably runny. If you don’t have one / can’t be arsed buying one, don’t worry, as you can ladle mixture straight into the pan and let it spread out to produce a pikelet which you don’t seem to be able to buy anywhere other than Yorkshire. 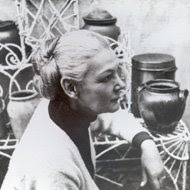 This recipe made us a baker’s dozen of crumpets:

Start off by warming a pound of plain flour through in the oven. Whilst your waiting for that warm up a pint of whole milk, 2 tablespoons of flavourless oil and a teaspoon of sugar to blood heat. Take out 3 tablespoons of the warmed milk and fork it through half an ounce of fresh yeast and let it thicken and become creamy. Make a well in the centre of the flour and add the yeast mixture, a tablespoon of salt and the remaining milk and beat the mixture – 5 minutes by hand, or about 3 with an electric beater. Cover the mixture and allow to rise and double in bulk – this is quite rapid with fresh yeast. Knock the mixture back and add ¼ pint of warmed water that has had a very generous pinch of bicarbonate of soda dissolved in it. Beat the mixture well and let it sit a rise again for around half an hour. 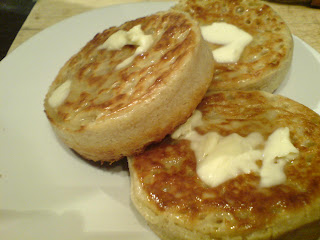 Grease a griddle or heavy-based frying pan and the crumpet rings with lard. Place the rings in the pan and pour in mixture two-thirds of the way up. Allow to fry very gently until the top is covered with holes and the surface is no longer liquid. Turn the crumpets over so they cook and colour on the other side. Allow them to cool and toast them, serving them with plenty of melted butter.

#110 Elizabeth David’s Crumpets – 6.5/10. The score I’ve given these crumpets may be changed later. The reason for this is that their consistency was rather soft and doughy, however they were piping hot throughout with no raw flour taste, so I’m not whether they are mean to be like that or whether they are undercooked. Consistency aside, they did taste absolutely delicious, so when I get the chance, I’m going to try them again…
Posted by Neil Buttery at 6:00 PM

Do you really need a tablespoon of salt? Not a teaspoon? Sounds a lot. But they look great.

No it's a tablespoon! I double-checked myself. They're not too salty actually...

Elizabeth David's recipe calls for milk and water mixed, not just milk, and she thought that a crumpet that needed toasting was fit only for the bin.

You'll have to tell Mrs Grigson about the milk, cos in English Food she says all milk in her version of Elizabeth David's crumpet recipe!